By: Brandon
In: Peddling Around
Tagged: Canada, Quebec, Quebec City, Travel
With: 1 Comment

While hatching our November and December plans, before deciding on Montreal, Ramona and I had for a time debated lingering in Quebec City for that duration instead. After researching and waffling between the two, the consensus we arrived on was that Montreal was a bit larger, a bit less French speaking (better for those of us who weren’t learning the language), with more entertainment options. We were decidedly intrigued enough with Quebec to immediately follow the purchase of our Montreal flights with the procurement of train tickets to the provincial capital for a long holiday weekend during our stay in Canada.

So, our third weekend in Montreal, we rose before the sun, walked briskly to Montreal Central Station, and hopped an early Friday morning VIA train over to La Capitale. 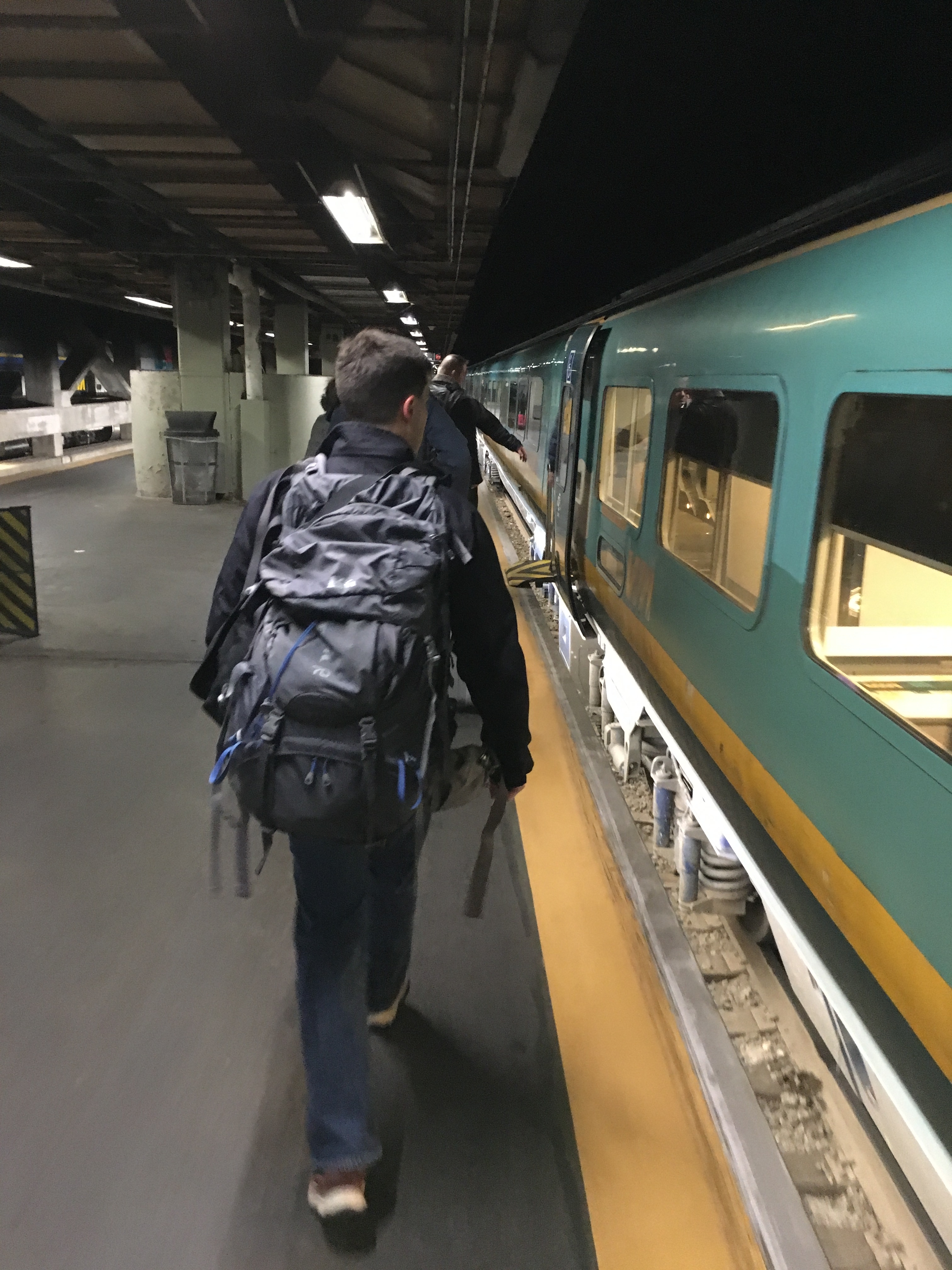 Riding the rails is a bit of a novelty for me, so although the viewing during the early hours of this trip were not the most scenic, the destination made up for it. The Gare du Palais in Quebec City is about the cutest terminal I’ve seen, insomuch as a train terminal can be defined as cute, with its French decor, coffee shops, and stained glass ceilings. Ramona successfully used some French she had been practicing to conveniently have our luggage stored at the station while we began exploring the city with purpose prior to checking in to our Airbnb. 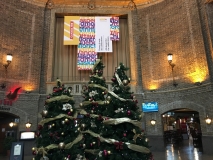 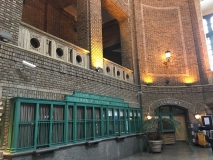 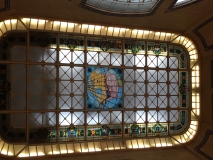 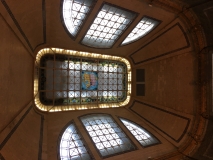 As we discovered on our first day in the city, much like in Montreal, the holiday atmosphere of the city emanated from the seasonal lights and decorations, French Christmas carols sung in the streets, and centuries old churches and buildings. These combined to make it a joy to wander through Quebec City in the winter time, which was fortunate, as there was certainly some time for us to kill before we could check-in. A half a day can easily pass before you know it by simply taking in the sights, people watching, and getting some much needed exercise traversing the winding, hilly cobblestone streets. 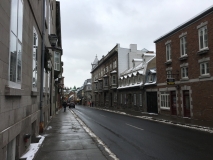 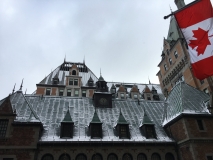 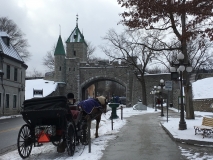 After meandering around the The Citadel of Quebec, an old military fortress and current government building, Ramona and I traversed past the historic Fairmont La Château Frontenac hotel, en route to the Governor’s Promenade. Strolling down the promenade in the brisk winter weather with the St. Lawrence at our side was a real highlight. 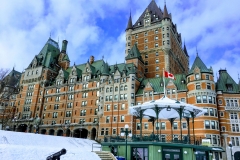 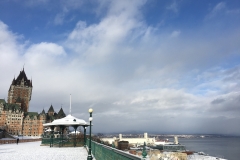 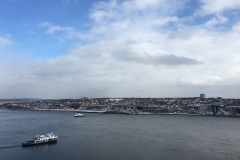 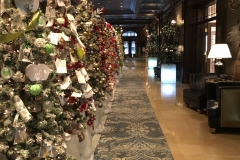 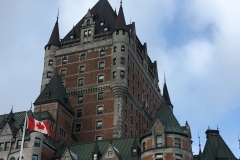 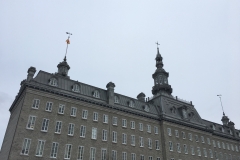 Of course, at this time of the year, one could argue that the city is even better when night falls, and the lights  come on. The streets of Old Québec come to life just a little bit more. 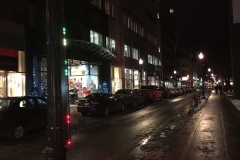 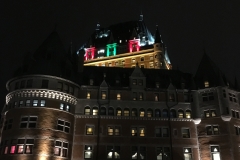 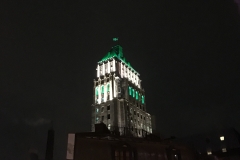 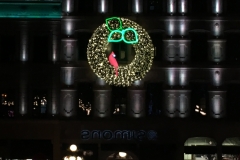 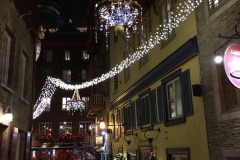 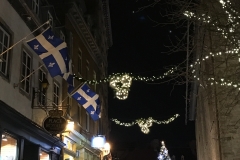 This part of the city plays host to an impressive, outdoor German Christmas Market. The market runs for about a month every year from the end of November to just before Christmas, so we were able to visit this on our second night in town. Similar to to the Marché de Noël market in Montreal, this fair has a pleasant atmosphere, with numerous handmade gifts and products for sale, fires for keeping warm, hot chocolate and mulled wine, tasty holiday treats, and live brass music. It was a Saturday night, and the market was densely packed, but despite the crowd felt like a great way to spend a winter evening with family and close friends. 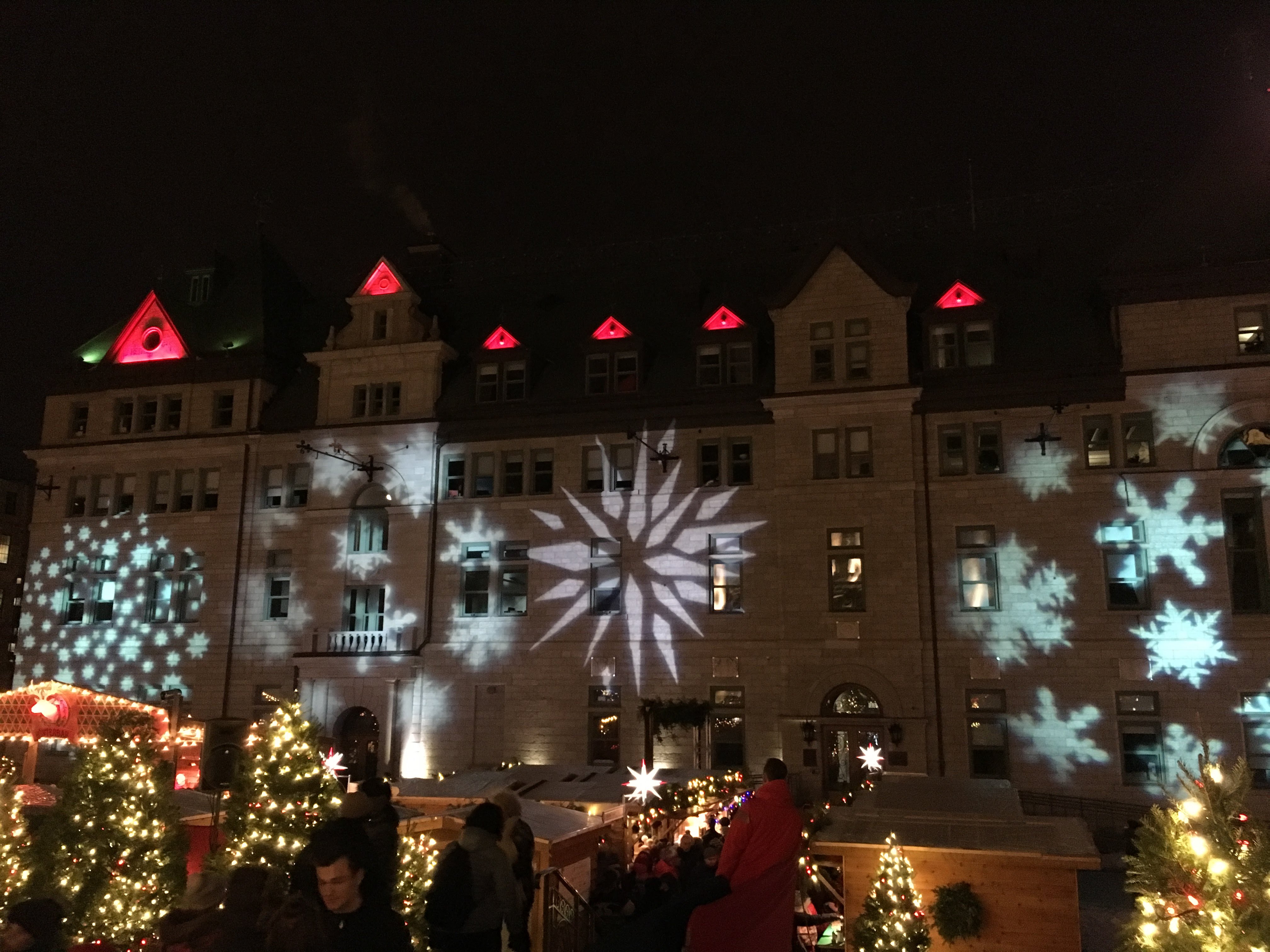 There is also a funicular that costs a few Canadian dollars, offering a decent view of Old Quebec, and a reprieve from a set of stairs.

View from the funicular 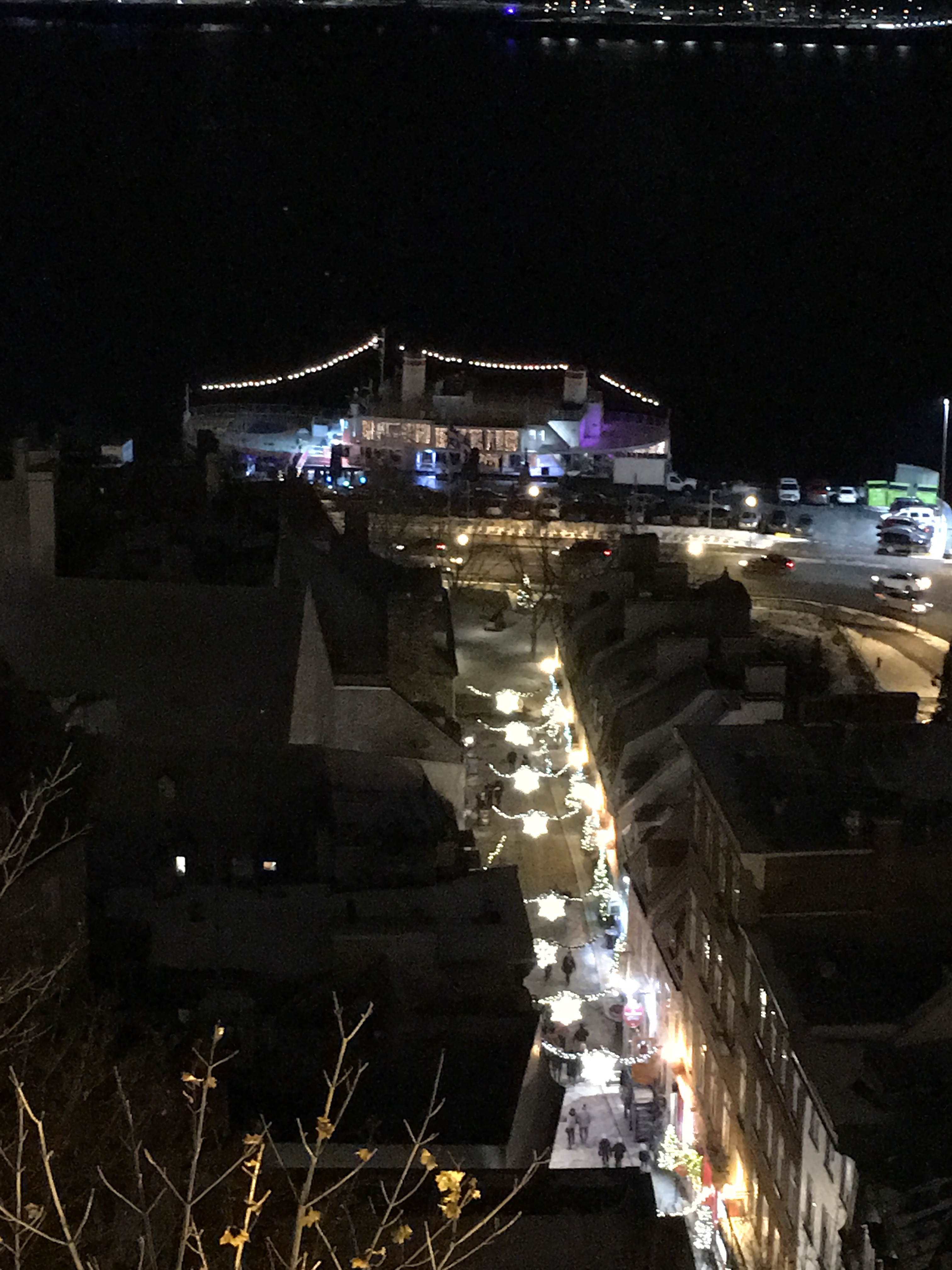 While there are some world class eats in Montreal, the food isn’t too shabby in Quebec City either. Cozy French cafes are common, and were right up our alley (literally, adjacent to the alley we used to enter the apartment building we stayed at). Frequently we found ourselves enjoying hearty pastries alongside hot espresso drinks, and these experiences further cemented in our minds the down-home, comfortable pleasure of being in Canada. 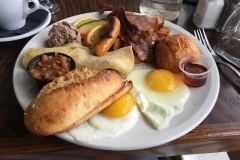 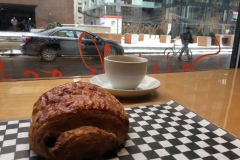 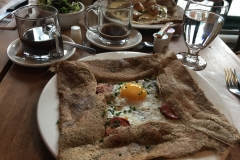 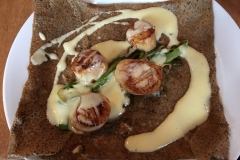 Contrary to our preconceived notions about French-ness in the capital city, in our short time in the city, the amount of French influence in language and culture seemed similar to that in Montreal, to our untrained eyes and ears. Of course, this represents just a 4 day stay in a select number of neighborhoods and venues, but it was curious nonetheless.

I neglected to mention earlier, but in the arrangements made for Montreal and Quebec, Ramona proposed the radical idea of attending a ballet, which is something people certainly do, but not something either of us had partaken in. If nothing else, it was sure to provide a new experience, and a fine opportunity to get dressed to the nines. So, on Sunday night, we dressed in our Sunday best (purchased in Montreal), headed out for a Sunday dinner and cocktail, and then made a beeline to the Opéra de Québec for the Sunday evening ballet, for a viewing of The Nutcracker (Casse-Noisette).

The Opéra de Québec is a classy venue, and while the show started out slowly in terms of action and dancing, the drama, precision, and sheer athleticism combined to make for an incredible performance. I don’t think it hurt that we were seated in the first row (as they say about the ballet, “go big, or go home”). After this observation, I firmly believe that even those that might be inclined to disregard the ballet for its lack of a leather sports ball and scoreboard would do well to give it a shot, and I suspect they would pirouette away impressed.

Overall, our interpretation of Quebec City as a quaint, old-world, winter wonderland and special place to spend an extended weekend was met, and then some. We have potentially returning here for a future winter vacation, and highly recommend it in particular for couples and families alike looking for a spirited holiday getaway.