By: Brandon
In: Peddling Around
Tagged: Mt. Bohemia, Skiing, Travel, UP, Upper Peninsula
With: 1 Comment

While spending the majority of the year in the warm Central American climate, I was afforded the opportunity to jet back home to Madison for a brief spell in February of 2018, after settling in San Jose, Costa Rica for a few weeks. The goal of this quick trip was to continue a tradition that has been like clockwork for eight years running: skiing at Mt. Bohemia in the beautiful Upper Peninsula of Michigan. 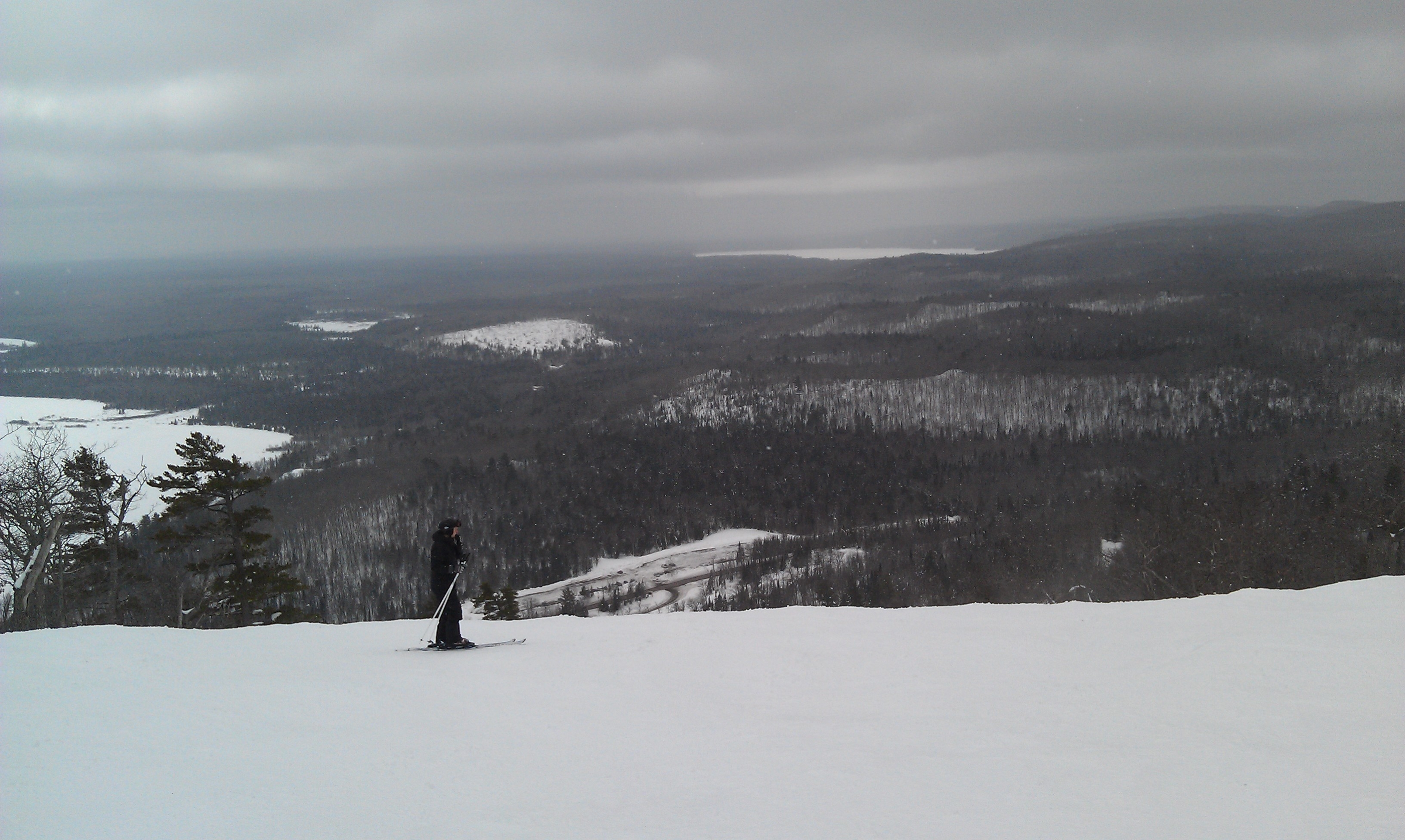 I’d like to provide only a rapid synopsis of this year’s trip, as well as the experience as a whole, which has maintained a remarkable consistency each year starting in the winter of 2010 (the only year the writer has personally missed, actually).

Beyond Hougton, the van has another 40 miles or so to go before reaching the outskirts of tiny Lac La Belle. A couple more backroads in the snowy darkness, and the familiar Mount Bohemia sign with the ticked off black bear emerges…we’ve made it! The entire trip time, including pickup up of skis, the van, and numerous stops, probably takes about 9 or 10 hours. This year, as I recall, we arrived between 10 and 11 PM, easily eclipsing our previous mark for earliest arrival.

After parking, the group employs the time-honored trick of packing our gear into sleds that we’ve brought along, and using the sleds to smoothly advance the gear up the slight, snowy incline to the yurt, our home for the next 3+ days. This group would certainly never consider trying to drive the vehicle directly up to the yurt…that would be a silly idea, and the vehicle would be liable to get stuck, one would think.

Inside the yurt, bunks and futons are claimed, the speakers are fired up, beer cans are cracked opened, and a pizza or three is thrown on the Pizzazz. General rowdiness takes over, and bedtime is probably after 3 AM. 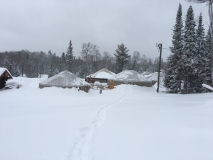 The next several days involve the gang rising early (some earlier than others), consuming the included Mount Bohemia breakfast of dry-ass pancakes and frozen sausage links, obtaining our lift passes in the main Mt. Bohemia yurt, and hitting the slopes. Fortunately, the UP was hit with some fresh powder during our stay this year, which made for great backcountry skiing. More often than not, the trip is planned for some time in February, and the mountain gets dumped on pretty good while we’re here. 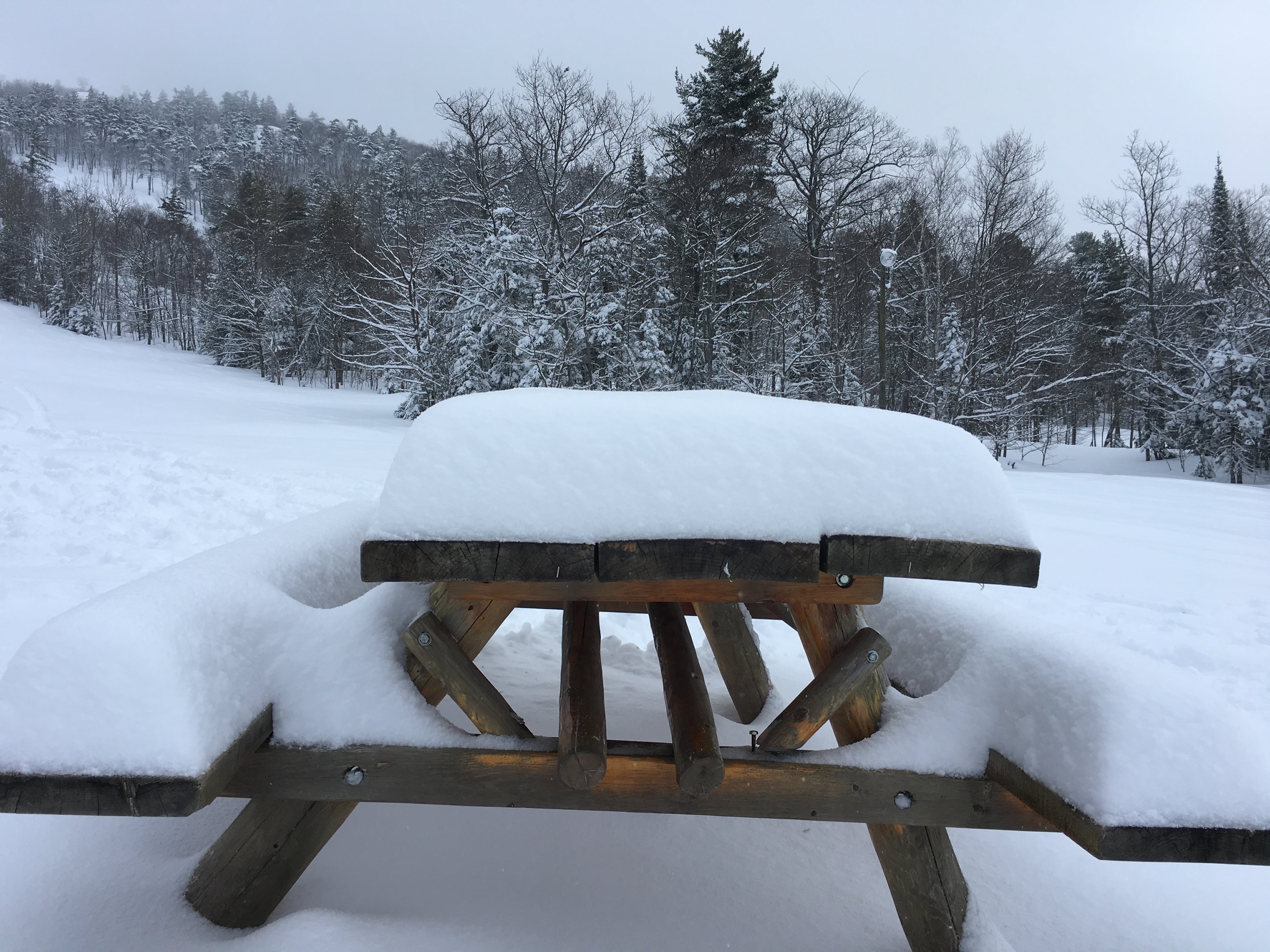 The great benefit of staying at the trailside yurts at Mt. Bohemia is the ability to ski-on and ski-off the hill easily. Needing a restroom break after a few runs? How about some refreshments, a snack, or a Backwoods? Checking on lunch in the slow cooker? Take one of the runs that comes out right above the yurt, and stop in for a bit, before meeting up with others in the group and heading back out again. Particularly after several days of skiing, when ones legs are becoming a little rubbery, the ability to take only a quick break to recharge or hang out before returning to the hill is wonderful. Maximum slope time. 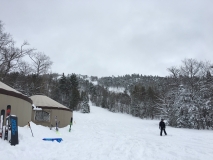 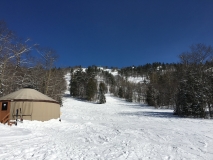 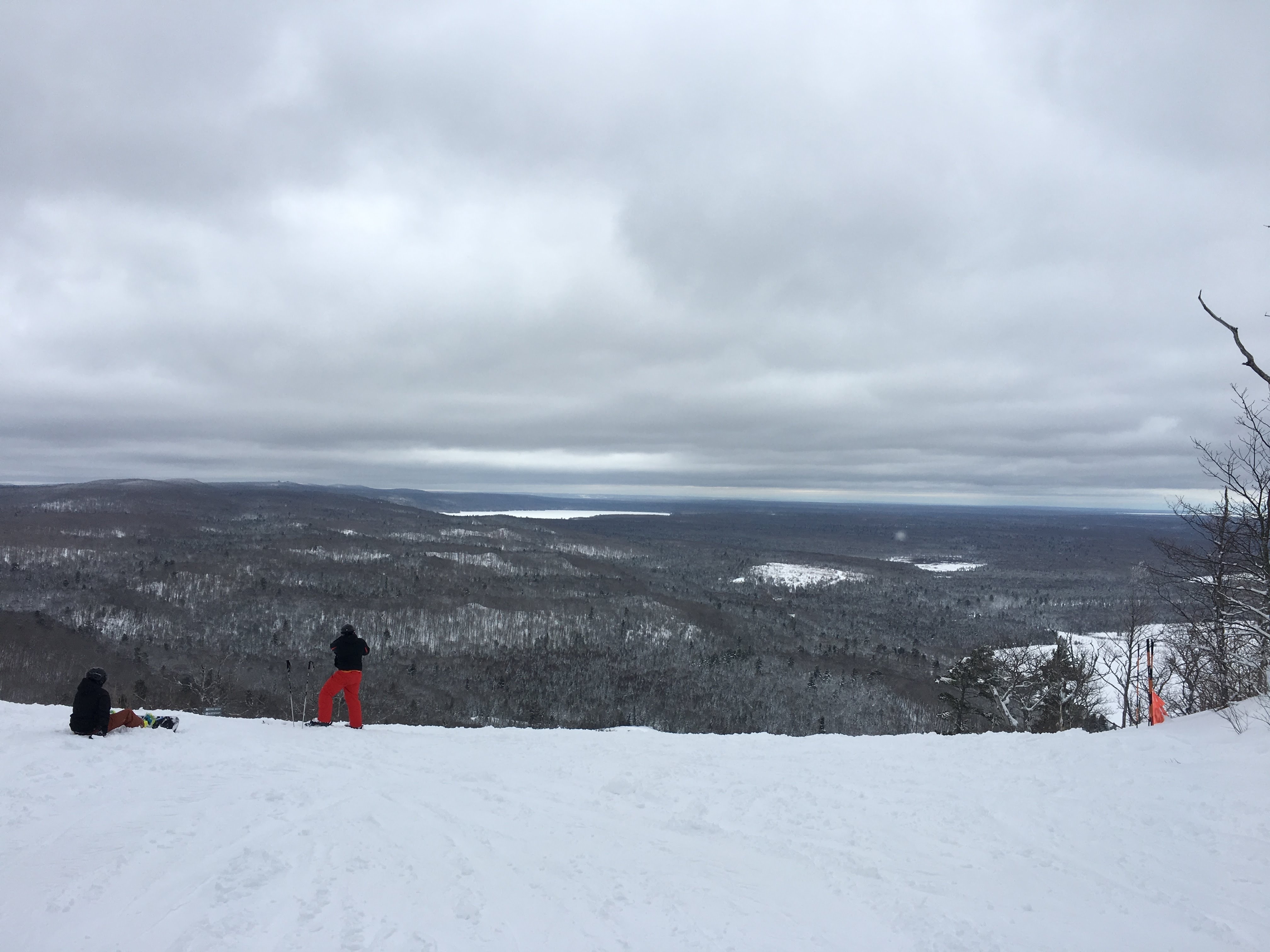 The most frequent question that arises from folks I have mentioned this trip to over the past 8 years is…what the heck is a yurt anyway? Or is it a “gurt”? 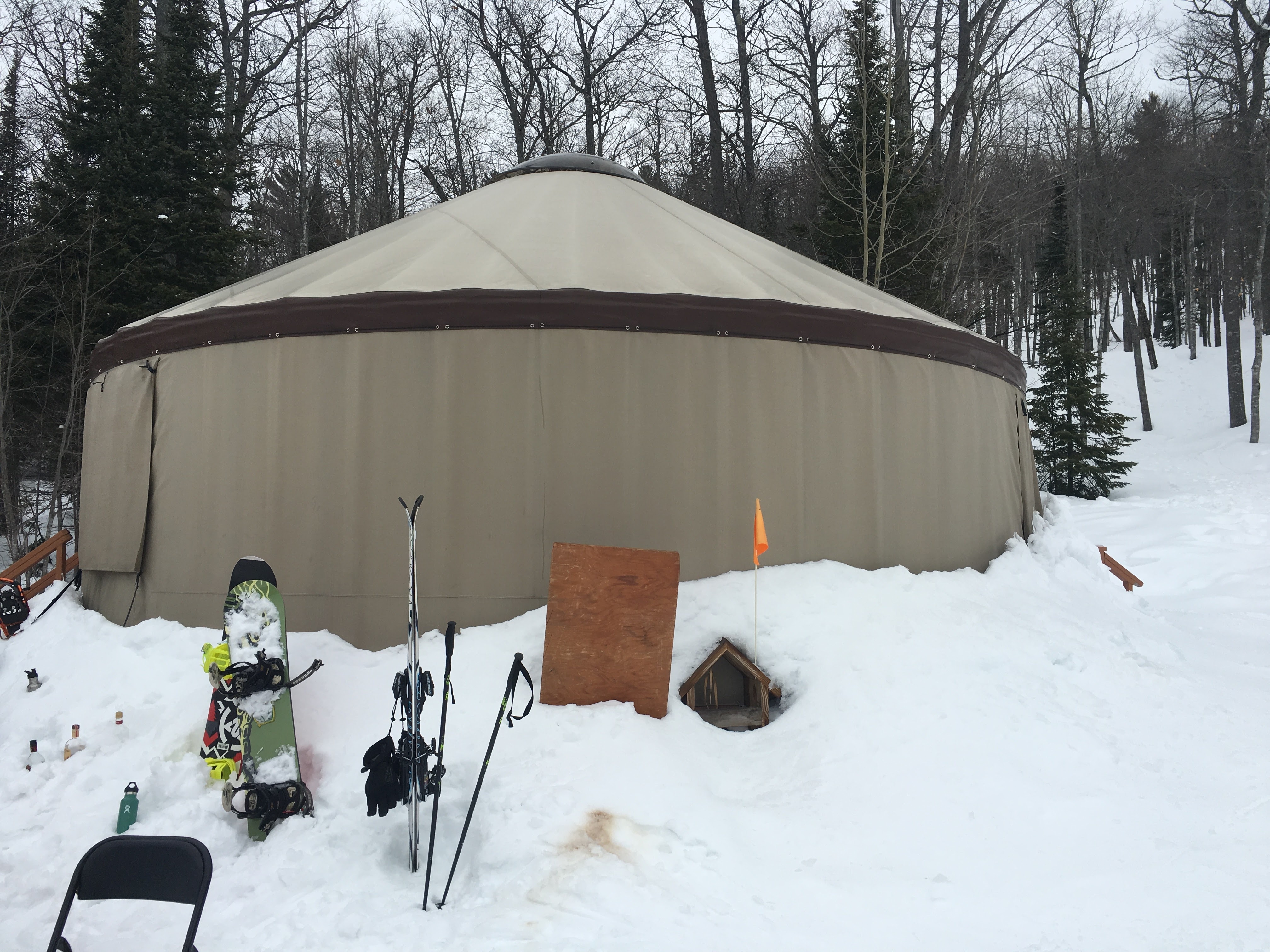 I dutifully inform them that a yurt is a magical, tent-like structure, that at Mount Bohemia at least, features bunkbeds, futons, a functional bathroom and shower, electricity, floorboard heating, and a ceiling fan. The yurts at Bohemia are all fairly similar in size and function; one yurt may exchange a futon for a bunkbed, or have the bathroom in a different location, but otherwise there are no major differences that we’ve noticed. The yurts must be reserved for at least 2 nights, and they are typically booked quickly as the snow begins to fall. The large units fairly comfortably fit 8 or 9 for sleeping, and there is enough space for a few camp chairs on the floor, and a central cooking/food table or storage area. Additionally, while coolers are needed to transport food and drink up north, a typical UP winter offers nature’s freezer just outside the yurt door. Hooks and rudimentary lines are present for hanging as well wet clothing, which is appreciated. 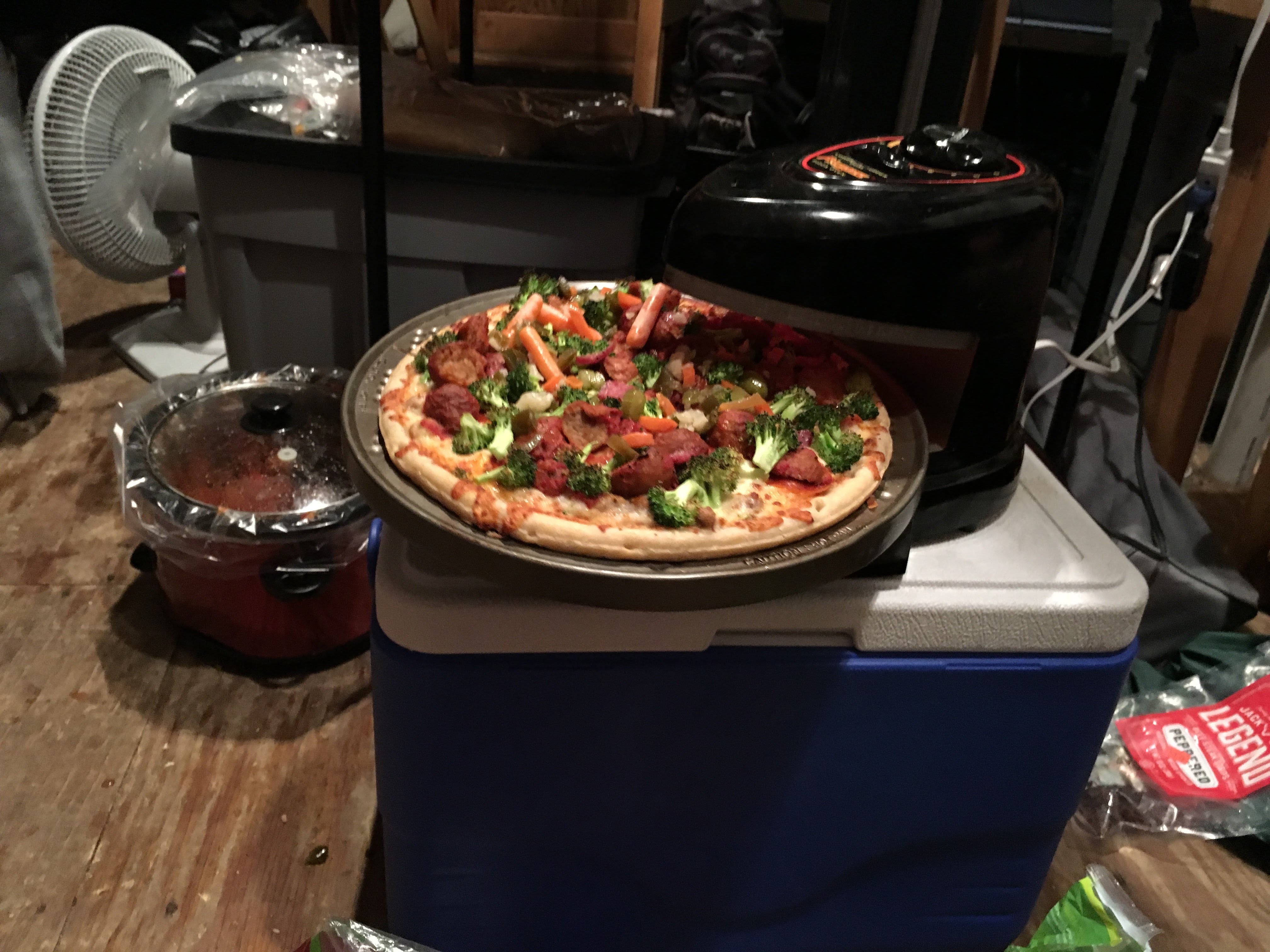 Our trips are frequently lacking in shareable photos from inside the yurt confines that could certainly help expand on this area, but, well, what happens in the yurt, stays in the yurt. For solo travelers or pairs there is also a hostel yurt nearby, trailside log cabins at the base of the mountain, or cabins along Lac La Belle that require taking a shuttle to get to the base of the mountain. Just get a yurt. You won’t regret it.

But How’s She Ski?

An overarching theme of visitors to Bohemia is that, provided there is enough fresh snow, the skiing and snowboarding is top notch, in particular compared to elsewhere in the Midwest. While I’ve never skied out west in Colorado or Utah, or well, anywhere besides the great state of Michigan, I trust the numerous experienced folks who have echoed this sentiment. There are no snow makers or grooming here; just crossing over what nature drops. The advertised mantra of “No Beginners Allowed” on most Mount Bohemia signage seems a little extreme, but not as extreme as these killer backcountry runs! In all seriousness, outside of the Ghost Trail and Prospector runs that remain flat and free of trees, the vast majority of the runs are black diamond or double black diamond, and can require some skill to navigate, or at least experience to know when to bail and save yourself if you’ve bitten off more than you can chew in the woods. With over 20 years of casual experience, I consider myself an intermediate-level skier, and there are some steep drops and tight turns through trees that I’ll tackle early on the trip when full of confidence. By Saturday, the final day on the hill, my ski legs are mostly gone, and though I’m attacking the hill less, I’ve already had a blast. To add, snowboarders are going to find it tougher, with certain areas requiring a fair share of pushing, unstrapping, and strapping back in. Whatever, I don’t snowboard anymore. 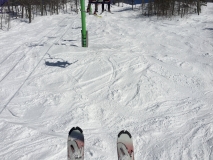 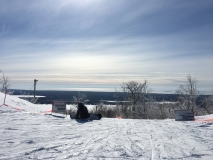 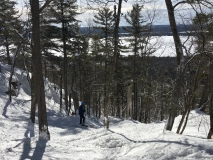 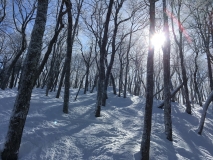 Generally there is no night skiing, which seems sensible for safety reasons. The lifts are open from around 10:30 to 4:30 during the week, and 9:30-5 on the weekend, making it desirable (though difficult) to emerge from one’s sleeping bag as soon as possible each morning. The $99 season pass or $159 two-year pass that is offered every year for a limited time in December should not be missed.

Mount Bohemia has changed a fair bit since the first group trip back in 2008. This part of the UP feels like the edge of the earth, particularly when perched on top of the mountain with a frozen Lac La Belle providing the backdrop, and very little light pollution during the events. The most recent additions spruce things up a bit, including a hot tub (females not included) and log cabin bar serving up some Michigan microbrews alongside wood-fired pizza (there is also a small sauna inside). These inclusions give off slightly more of a “UP-style resort” feel to the place, which I personally find welcome. Bohemia will not be confused with Breckenridge I don’t think, so it is nice to have some amenities onsite, since there is not much in the way of proper towns, entertainment, or great food near at hand. On weekends the public yurts also play host to some rudimentary live music, and occasionally Burton-sponsored stand-up comedians have visited.

“How about those lame skiers? You ‘boarders know what I’m talking about.”

There are official hiking and snowshoeing trails (known as “Little Boho”), as well as some…unofficial trails. After dinner, what do seven or eight guys that have skied and snowboarded all day do? They pack some beer and cigars, put on headlamps, and snowshoe up some mountainous trails for several hours underneath a bright moon. Tromping through the thick snow deep in the woods, legs and lungs burning, is a profoundly worthy escapade.

This is the edge of the earth, and internet and cell access is poor throughout the resort, and this area of the UP in general in my experience. I would occasionally take my phone up for a run or two to the top of the lift, to catch one bar and pull in a few messages and emails. This is a good chance to unplug, I suppose. 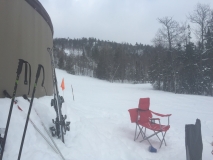 (Too) early on Sunday morning, sore, exhausted, and dehydrated, the gang regroups and begins the arduous process of reloading the van with all of our gear. Occasionally a few beers or frozen pizzas won’t be coming home, and are left in the snow for the next guests of the yurt.

On the long drive back, little is said as we reflect on the week’s trip, and recuperate our minds and bodies. A stop or two is made for gas and food, usually at an arbitrary hole in the wall neighborhood bar/restaurant in the UP or northern Wisconsin. If necessary, we barter with the locals, such as the time one of the skiers in our group tore their ACL during the trip, and an old woman at the bar we stopped at sold him some crutches for the ride home.

After dropping off the rental van and ski gear in Appleton and Oshkosh, respectively, our group returns in separate vehicles to Madison, weary as hell, but knowing at approximately the same time in 2019, we will be amped, stoked, and pitted, eager to do it all over again. 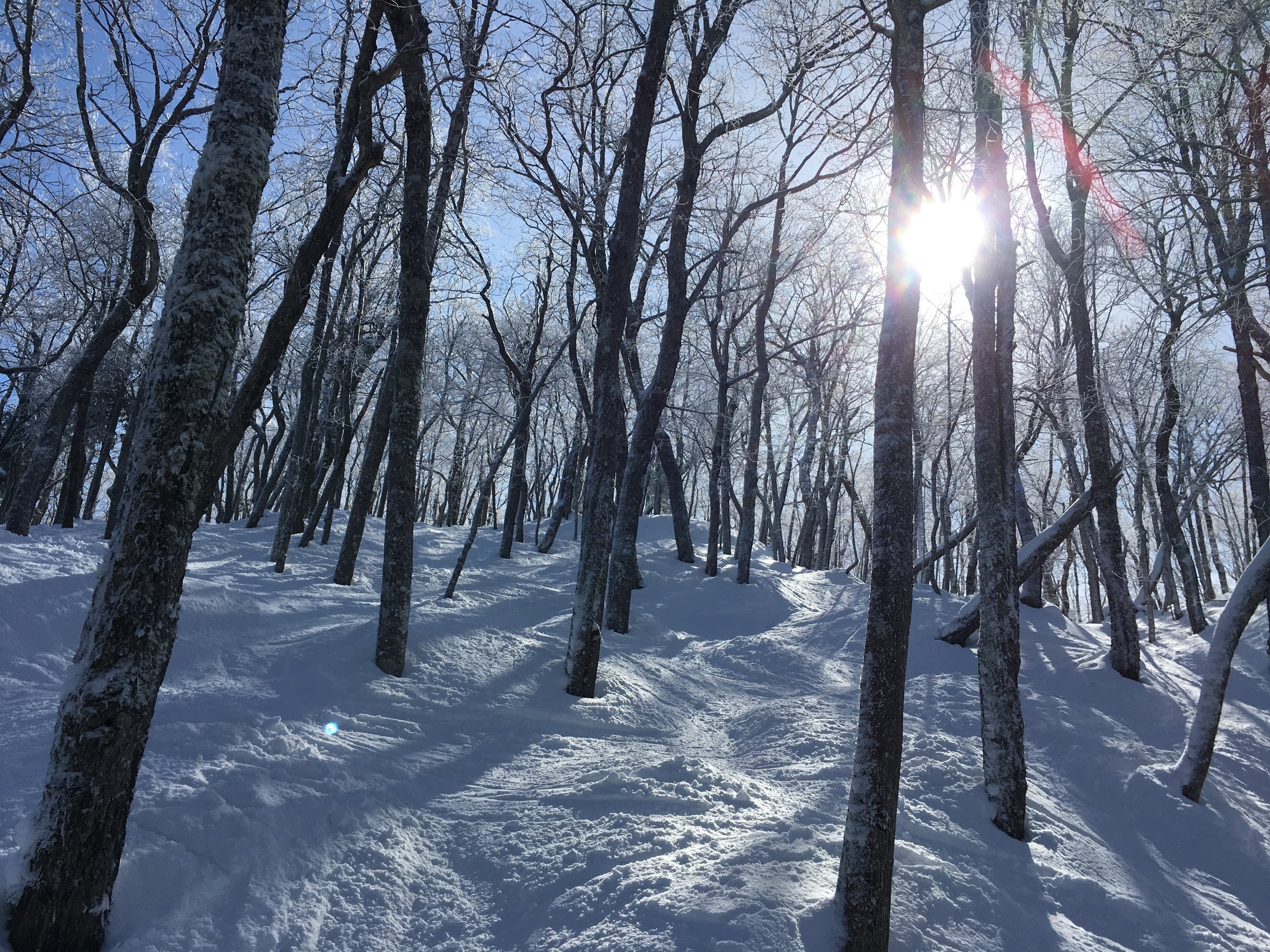