By: Brandon
In: Peddling Around
Tagged: Costa Rica, Tamarindo, Travel
With: 5 Comments

When last we left off, Ramona and I were hopping a Grayline shuttle on a Friday morning, heading to Tamarindo, the second stop on our year-long tour in Costa Rica. Shortly after we arrived at our rented condo, we encountered El Horno Loco (the mad oven).

But first, the rest of the week.

Tamarindo is a popular beach town located in the Nicoya Peninsula, in the Guanacaste Province. Now when I say Tamarindo is popular, I mean it is popular almost exclusively with a few groups of people: American and European tourists, and Tico surfers. In particular, there are a lot of small shops and properties owned and operated by Americans. On average, my feeling is that the typical Tico that lives elsewhere in the country probably doesn’t care for the town too much. 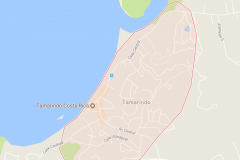 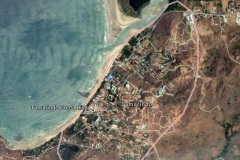 One may have to leave their sensibilities at the door in this location. As gringos, it was rare to set foot in town for more than a couple of minutes without being accosted to purchase touristy knickknacks, tropical drinks, or drugs. A simple “no gracias” ends the conversation, but interactions like these can get old fast.

The town’s main drag run right along Playa Tamarindo (Tamarindo Beach). The beach has some pretty epic waves, and the width of the shore varies widely with the high and low tides; at different points during the day there may be only a few feet of shore with which to place towels or other gear. Early on in our stay we took a long walk around the outskirts of town, in search of a coworking location that was listed online. The coworking place no longer seemed to exist, but Ramona and I did take in some great sights, including circling back to an adjacent beach (Playa Langosta, or “Lobster Beach”), and spotting a family of howler monkeys crossing the road. Last summer during our honeymoon we had heard the howler monkey’s distinctly loud wail while out in nature, but had never seen one in person, so this experience left us rather giddy. 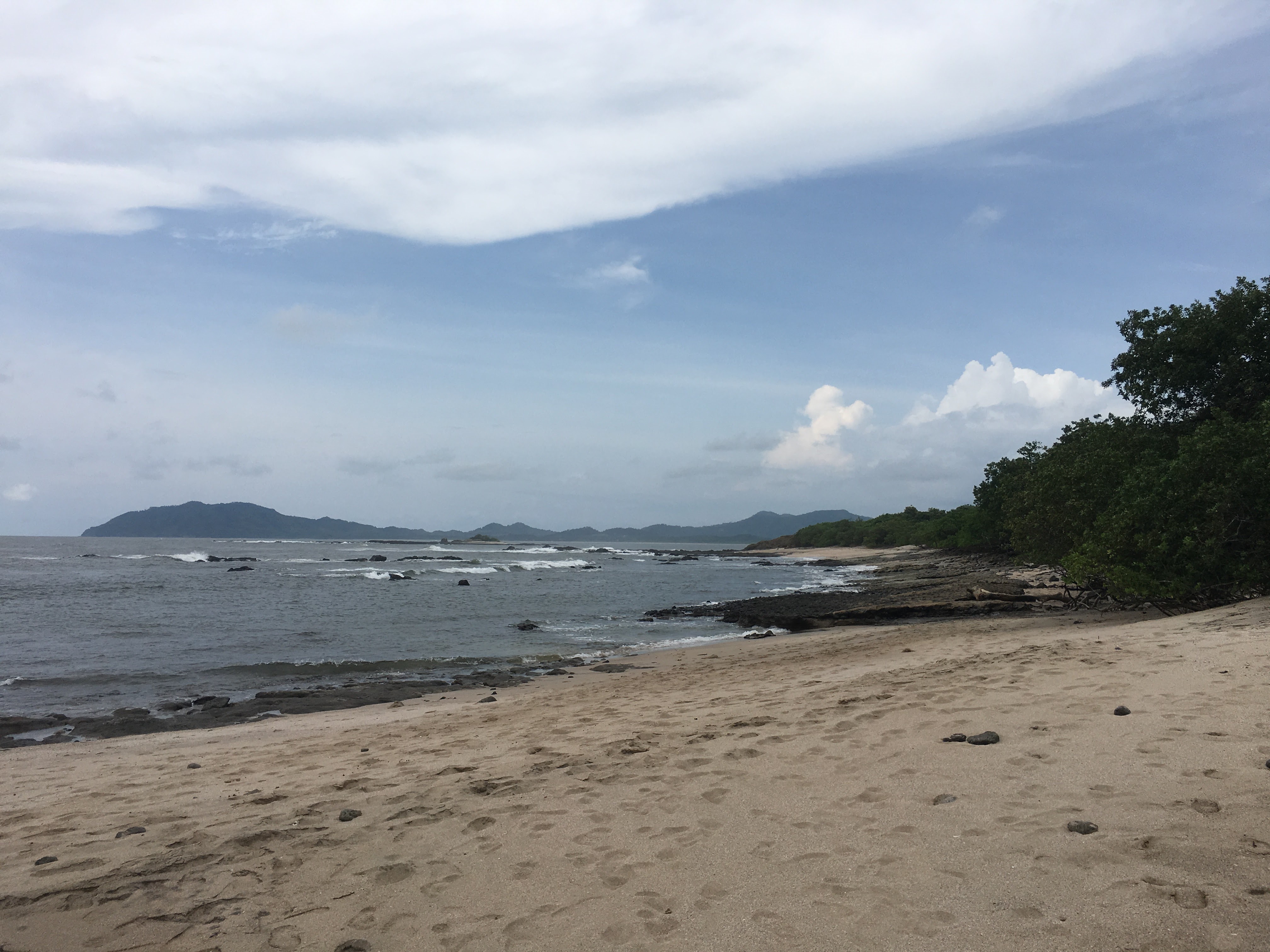 Howler monkey on a roof 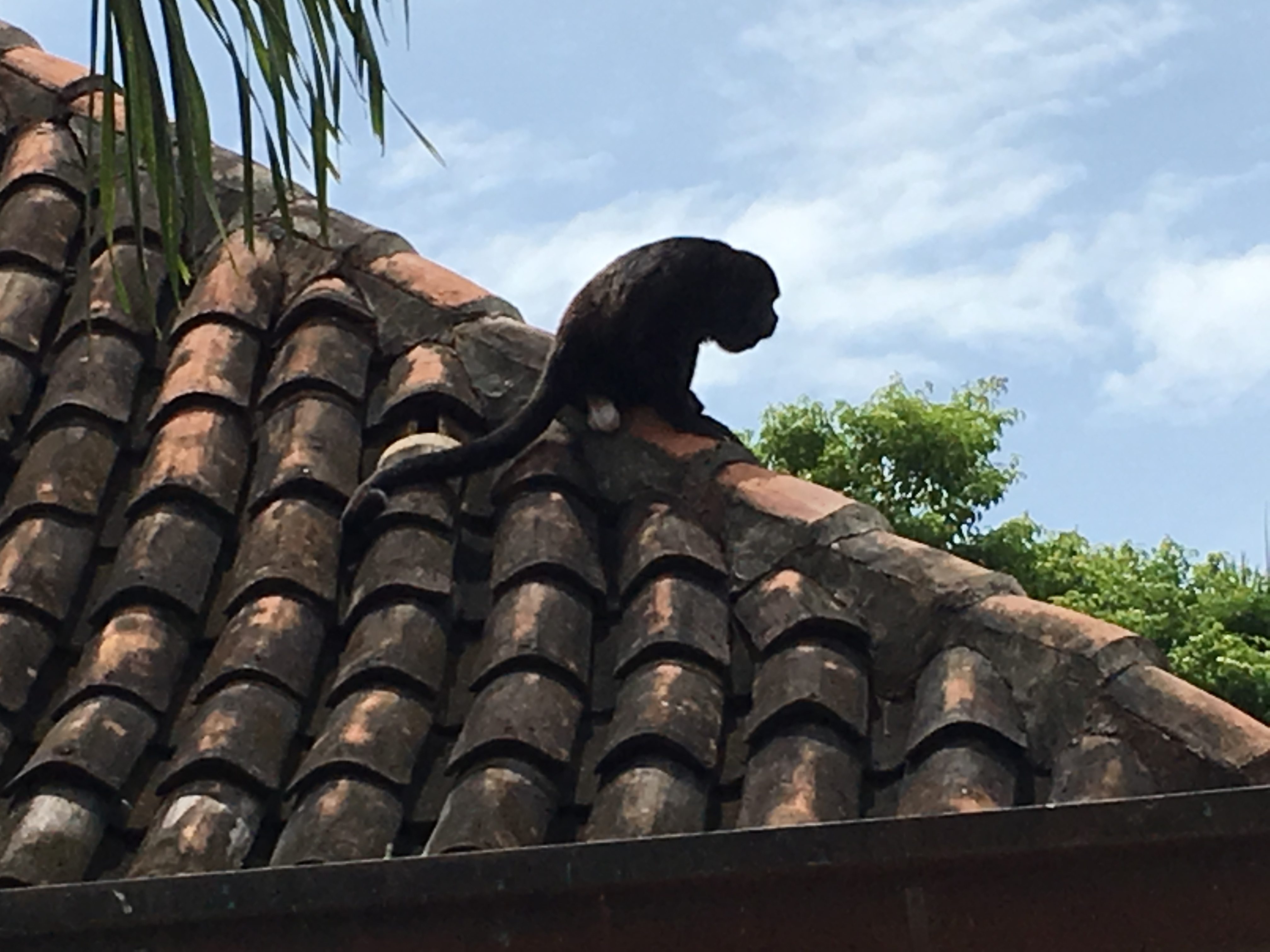 ◄ Back
Next ►
Picture 1 of 7
Tamarindo Beach is known for its surf culture, so I felt obliged to test out my surf legs. The beach consistently has great beginning to intermediate waves, so I signed up for my first-ever lesson at a local shop. Ramona has experience surfing a couple of times in the Pacific off the coast of Nicaragua, but sat this one out to nurse an injury suffered at the hands of an upset appliance (more on that below). I signed up for a group lesson, but being the only person present (good ol’ slow season), I received a one-on-one lesson for the discounted group rate.
Surfing takes some getting used to, but the feeling of (briefly) standing up on the board and riding a wave is worth the falls and minor frustration that preceded it. This will not be my last rodeo in Costa Rica. Also, I will definitely try surfing again while I’m here. 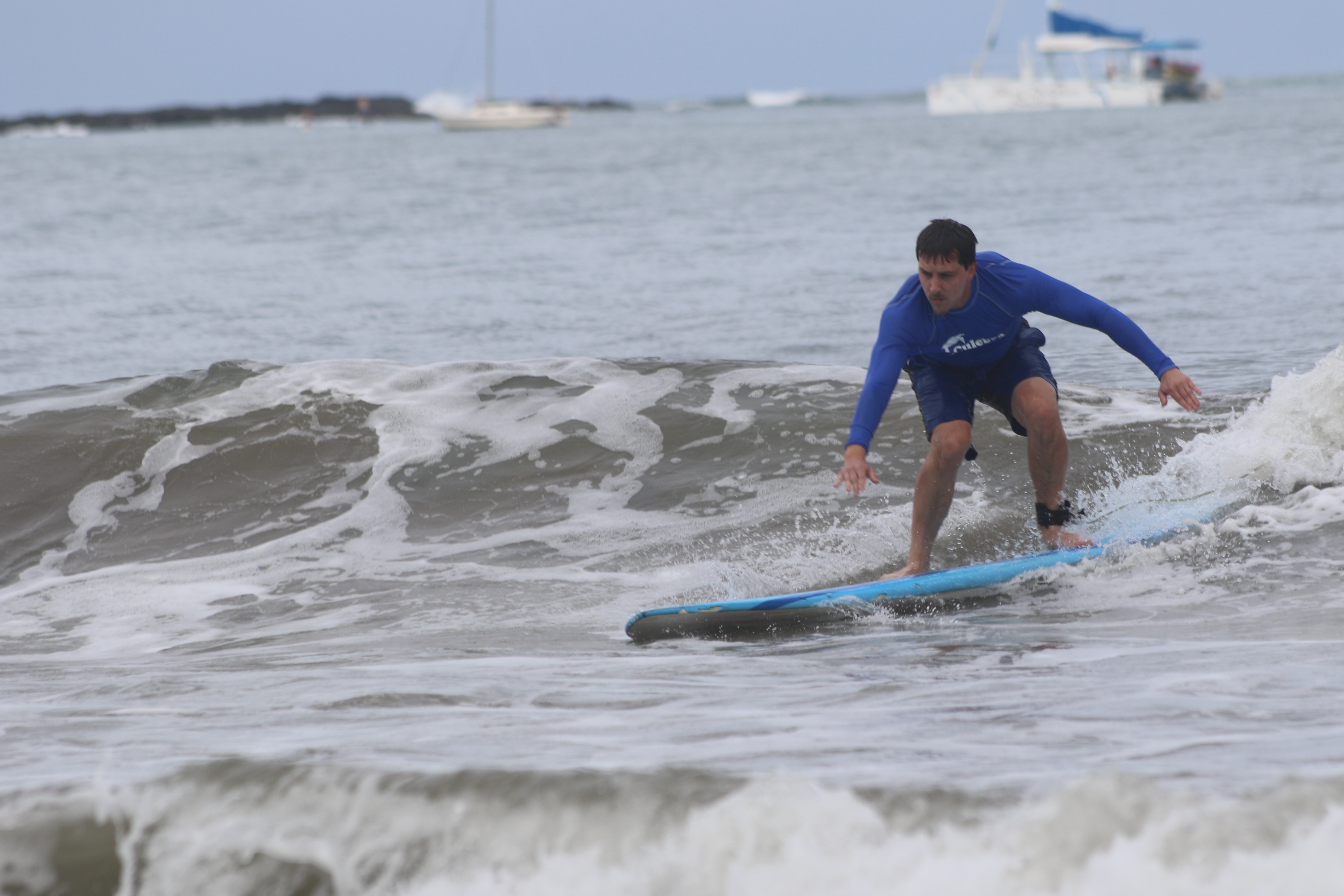 The beach was less than a quarter of a mile away by foot, but the pool in our complex was just down the stairs from our condo. We took advantage of it’s proximity to frequently take a quick swim in the morning, during lunch, or in the evening after dinner. Again, with this being the low season/off-season in Costa Rica, there are fewer people traveling here, so the pool was virtually ours alone for the entire duration of our stay. An aspiration both Ramona and I had for our experience abroad was to read a lot more, and wading in the pool while perusing a book on a Kindle became a pretty easy way to meet that aim.

While in Tamarindo, I was also able to get my seasonal Wisconsin sports fix. On our only Sunday there, the NFL season properly opened, and we took in the afternoon Packers/Seahawks game at the most American sports bar in the country, called Sharky’s. They proudly serve jello shots, and this is their logo: 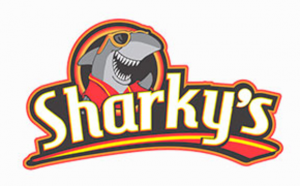 The Packers won, and we chatted with a woman from Eau Claire in a Clay Matthews jersey who resides in Tamarindo for nine months out of the year. Many other Americans were here watching their teams; the atmosphere was like hanging out at Buffalo Wild Wings on a Sunday in the fall. During the week we enjoyed a pizza and a (cloudy) ocean sunset, while also catching some of the Brewer’s game, which was projected on a brick wall on top of the roof. 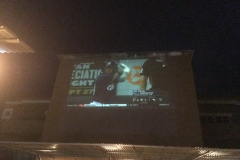 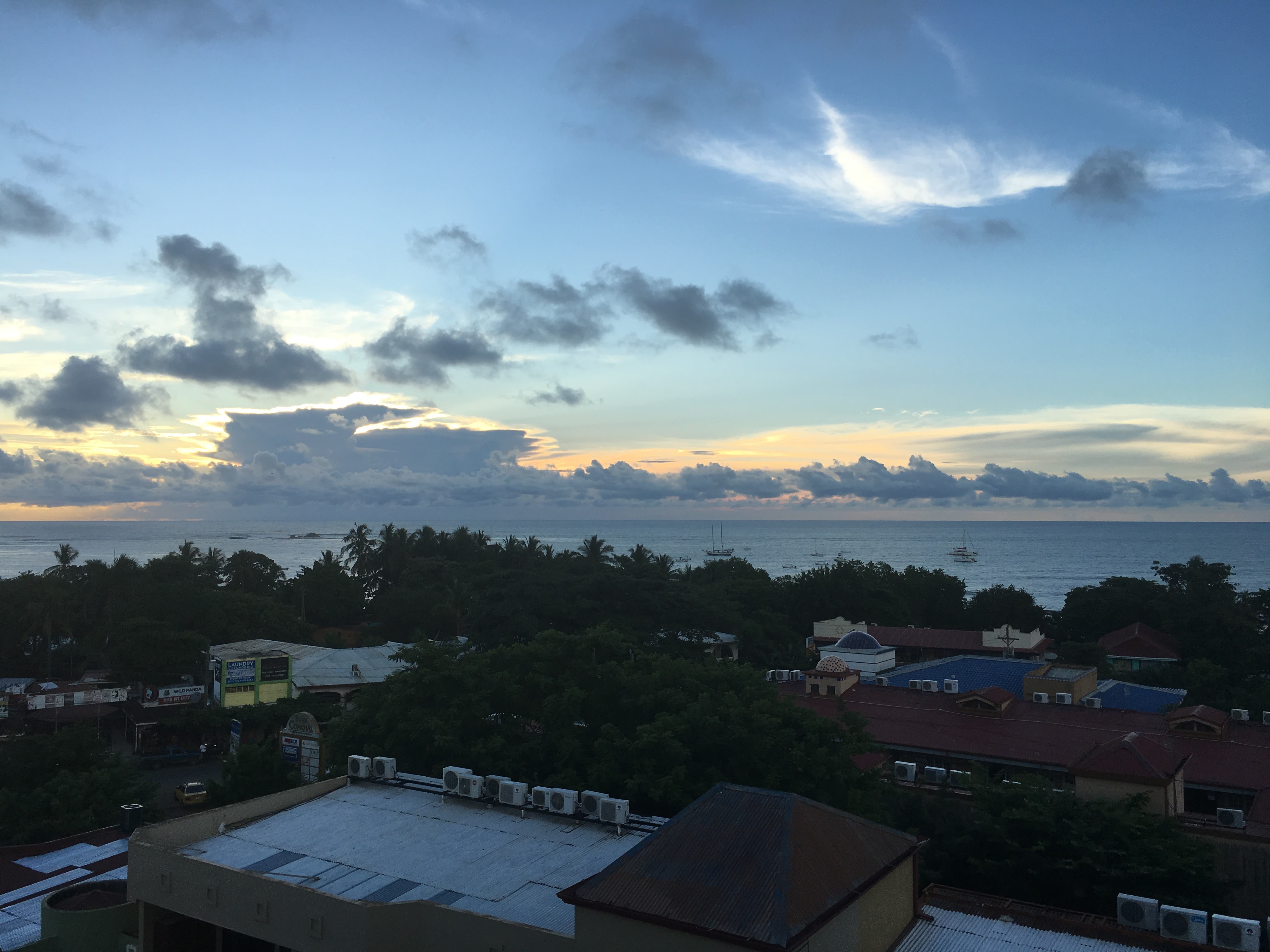 ◄ Back
Next ►
Picture 1 of 2
On the following Friday morning, after a weeklong stay, the two of us finished cleaning and packing up, awaiting an early morning Grayline shuttle for our next stop, to La Fortuna. We were surprised when the driver arrived over 20 minutes early. Thus, our first encounter of “Tico time” where someone showed up super early rather than super late.
Oh, yeah, before we venture onward toward La Fortuna and Arenal Volcano…let me tell you quickly about the mad oven.
Shortly after arriving in the condo we were renting, we walked next door to do some grocery shopping, aiming to make a quick lunch/snack before exploring the town. We bought some frozen popcorn chicken, fired up the gas oven, and busied ourselves finishing unpacking, I checked back on the range shortly thereafter, and it seemed as though it was not functioning. Ramona came over to help me investigate, and as we troubleshooted in front of the oven, a switch was flipped.
The two of us can now vouch that a proper explosion, happening inches in front of you, is rather loud. The appliance launched itself away from the wall towards us, with the bottom drawer shooting out. The stovetop burners were fired like mortars, and parts littered the kitchen. Items that had previously clung to the walls or doors now lay on the floor. Part of the doorknob on the main door in the unit fell off.
We learned in retrospect that the oven had not been used for some time. The pilot light had failed to properly stay lit as expected, and I had not thought to check it. We had turned on the gas, filling the oven, and as an ignition switch for the stovetops was flipped while we fiddled with the appliance, the oven full of gas forced itself through the (fairly tightly sealed) burners upon ignition. Explosion.
The oven and/or the assorted pieces that were flying around sliced Ramona’s toe and finger pretty good, but no stitches were needed. I was right in front of the oven and somehow escaped without a scratch on me, despite the oven and its front door slinging forward. It took a trip abroad for us to learn a very important thing: always double check the pilot light in a gas oven. Well, two things: it turns out, we don’t really care for popcorn chicken.
2017-09-30
Previous Post: Semana Uno – The Beginning
Next Post: Version 1.2 of Egg Timer released