With a free Saturday suddenly popping up in mid-July, I began scouting out a simple overnight backpack adventure, with the only requirement being that I didn’t have to drive more than a couple hours outside of Madison. Searching for state park campsite availability, pickings were decidedly slim, but after almost giving up, a previously booked walk-in campsite at Kettle Moraine State Park – Pike Lake Unit freed up. I reserved it immediately; digging deeper, I found that part of Wisconsin’s own Ice Age Trail ran to and through the Pike Lake Unit. What better trail to tramp along on a hot summer day in Wisconsin?

After wrangling four friends to come along, I concocted a light trip itinerary. The group would park and start out with a spell in the Loew Lake Unit. From there, the main course from a hiking perspective would be the entirety of the Holy Hill Segment. Finally, we would cover most of the Pike Lake Segment [PDF] en route to our campsite for Saturday night. As a practical matter for this adventure, some heavy and bulky items (such as beer, and coolers for holding said beer) could be left in a vehicle near the walk-in campsite, and be retrieved as we passed through near the end of the day’s hike. Truly, this was an appealing prospect.

Traveling separately in two vehicles loaded with full backpacks and coolers, we headed east out of Madison in the direction of Richfield. After stopping at the Pike Lake Unit park office to register, our group parked at the nearest lot to the walk-in campsites, combined our gear into one car, and took off toward the Loew Lake Unit to hit the trail. The weather forecast called for a hot one, with a heat index of over 100, and as we discovered the day before, a 70% chance of rain over the entirety of the afternoon.

We parked at a designated lot in the Loew Lake Unit off of Emerald Drive, which seemed like the best nearby location adjacent to the Ice Age trail to leave a car overnight. The lot was empty but for us, and we swiftly saddled up and started on the trail heading north. The entirety of this segment of the Ice Age trail is roughly 4.8 miles, but from where we joined, it was a simple, pleasant 1.15 mile traipse through some wildflowers, with the hot sun already beating down overhead. I’m confident the full length of this segment is equally as good. The section terminates abruptly at Emerald Drive, requiring hikers to walk along the pavement until reaching Donegal Road, and then take that road to the Holy Hill Segment trailhead. This paved portion was a little over one mile in total, and the five of us were happy to reenter the woods. Hey, we came to hike after all. 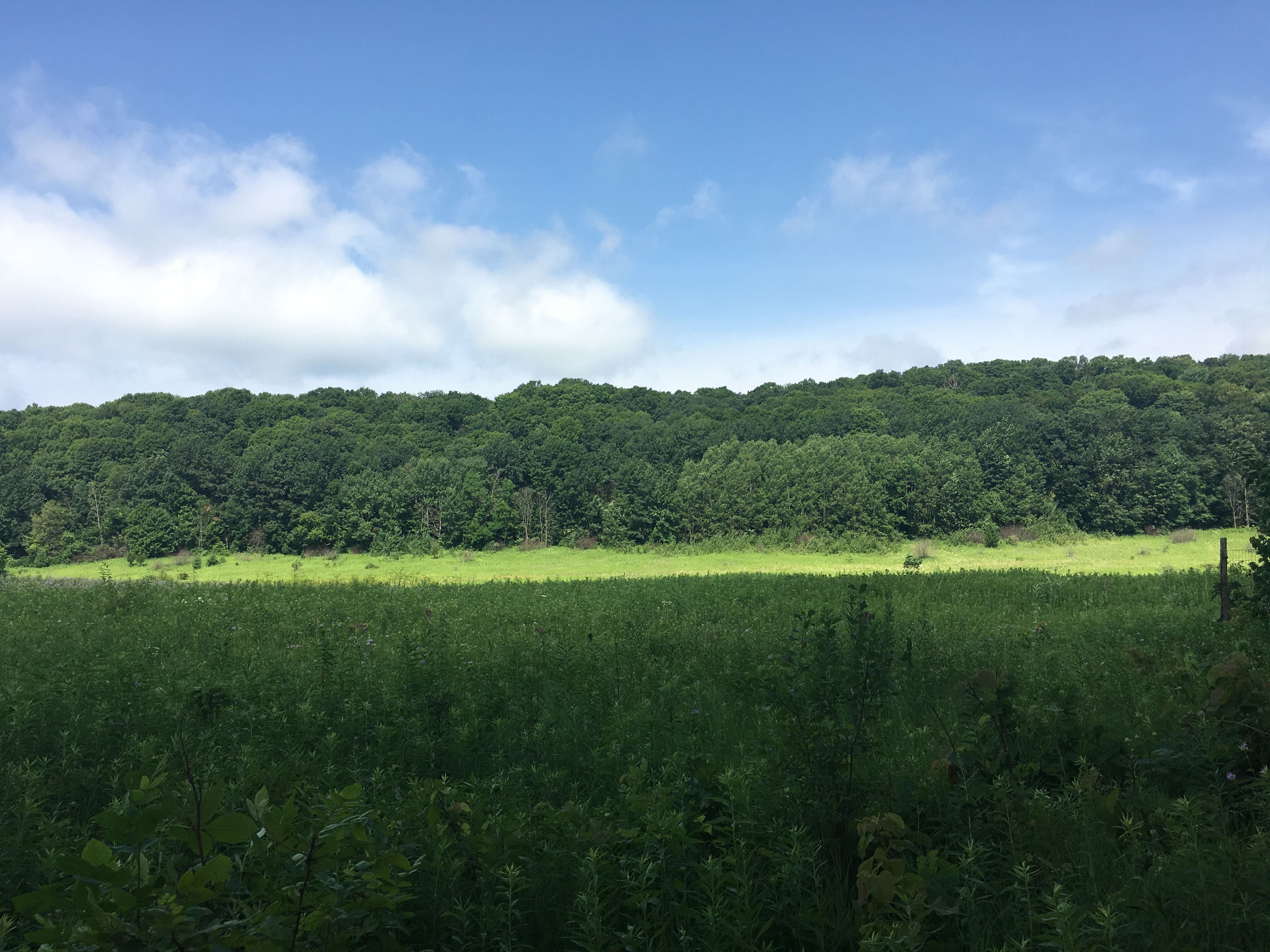 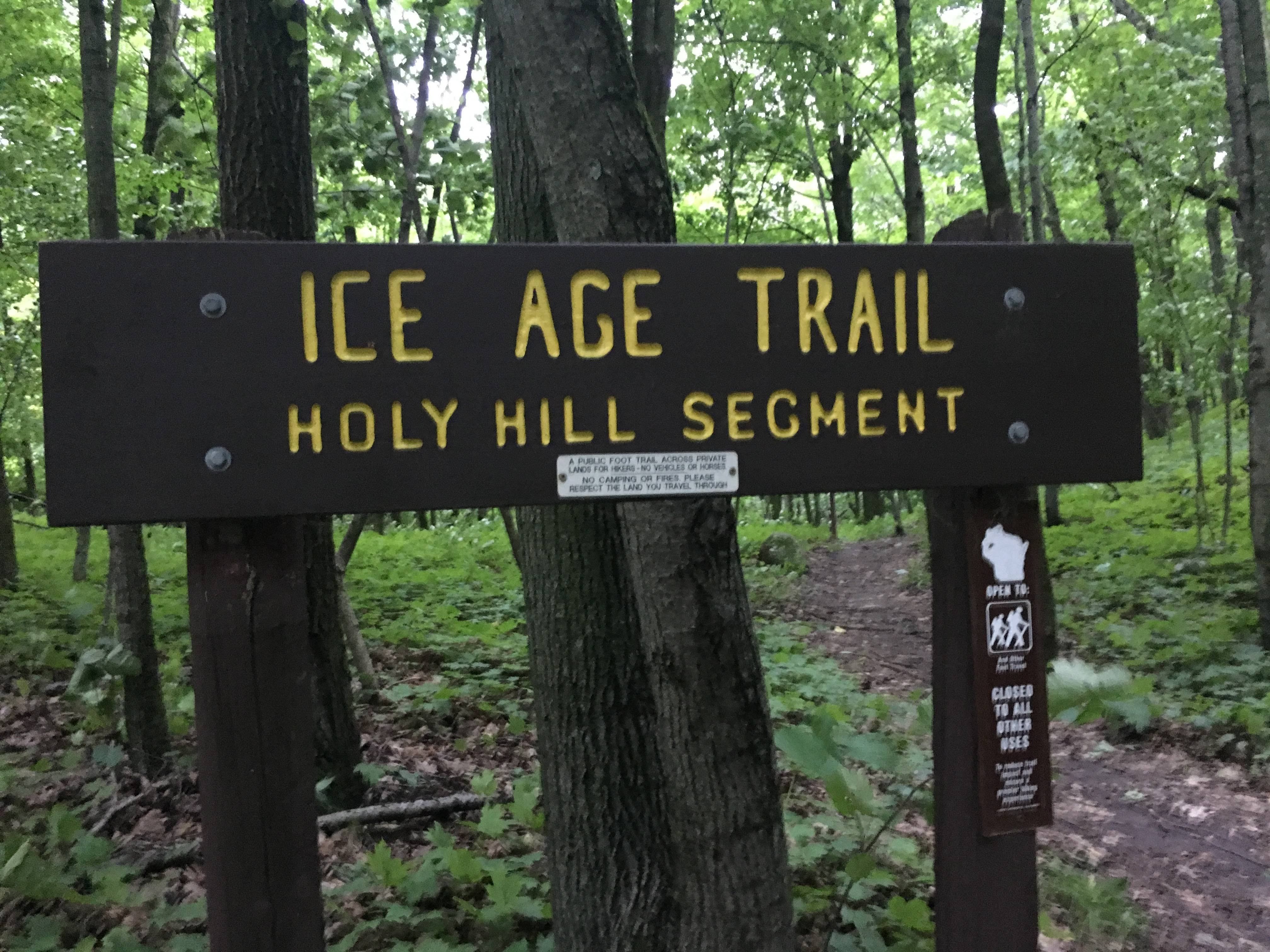 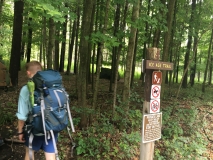 At the Holy Hill trailhead was a small, easily accessible water source (Flynn Creek), which we gladly made use of over discussion of general water filtration gear and strategies.

After filling up dirty bags and water bottles and grabbing a quick snack, the hiking resumed as the segment began with some nice wooded sections with small, winding elevation gains. Along the way, numerous signs point out information about the route, or the various glacial features of the Ice Age Trail. One of my compadres and I found a small spur trail up a hill that promised a view of Holy Hill, but it was blocked by trees at this point. There was a cool teepee up there though. 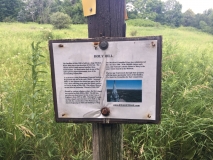 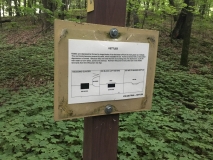 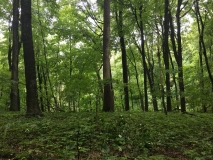 This was a pretty, scenic section, with only the noise from our steps and the nearby Holy Hill church bells ringing on the hour to be heard. Speaking of, here’s a video clip of such a thing: 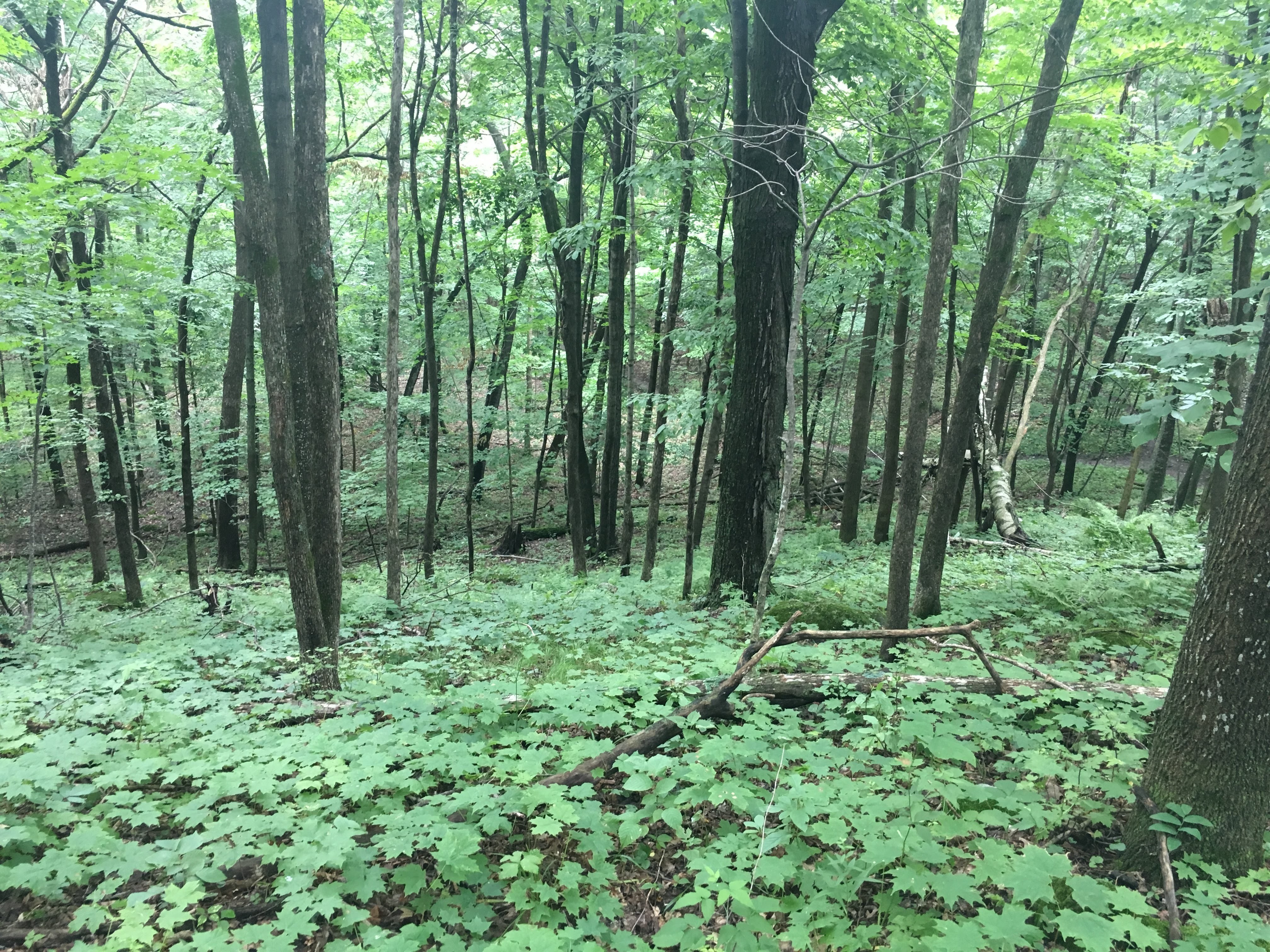 As the trail approached a clearing where the shrine came into site, as through a switch was flicked, the all-encompassing sun was gone. The sky began to darken, and the temperature dipped by about 10 degrees instantly. Rain was clearly not far away. After a quick break, the group pressed on, hoping to edge closer to setting up camp before being pounded with rain.

Unfortunately, there was no such luck, as cold drops fell not five minutes after carrying on. For this trip I threw an emergency poncho in my pack at the last moment, and it performed fairly well at keeping my backpack and I relatively dry throughout the increasingly steady downpour. Definitely a keeper for future rainy backpacking trips.

Despite the dampness, enjoyable scenery was found as the trail predominantly switched between dense forests and open farmlands. There wasn’t much sense in stopping for breaks longer than a couple of minutes, or enough time to fuel up with a bar and gulp of water. 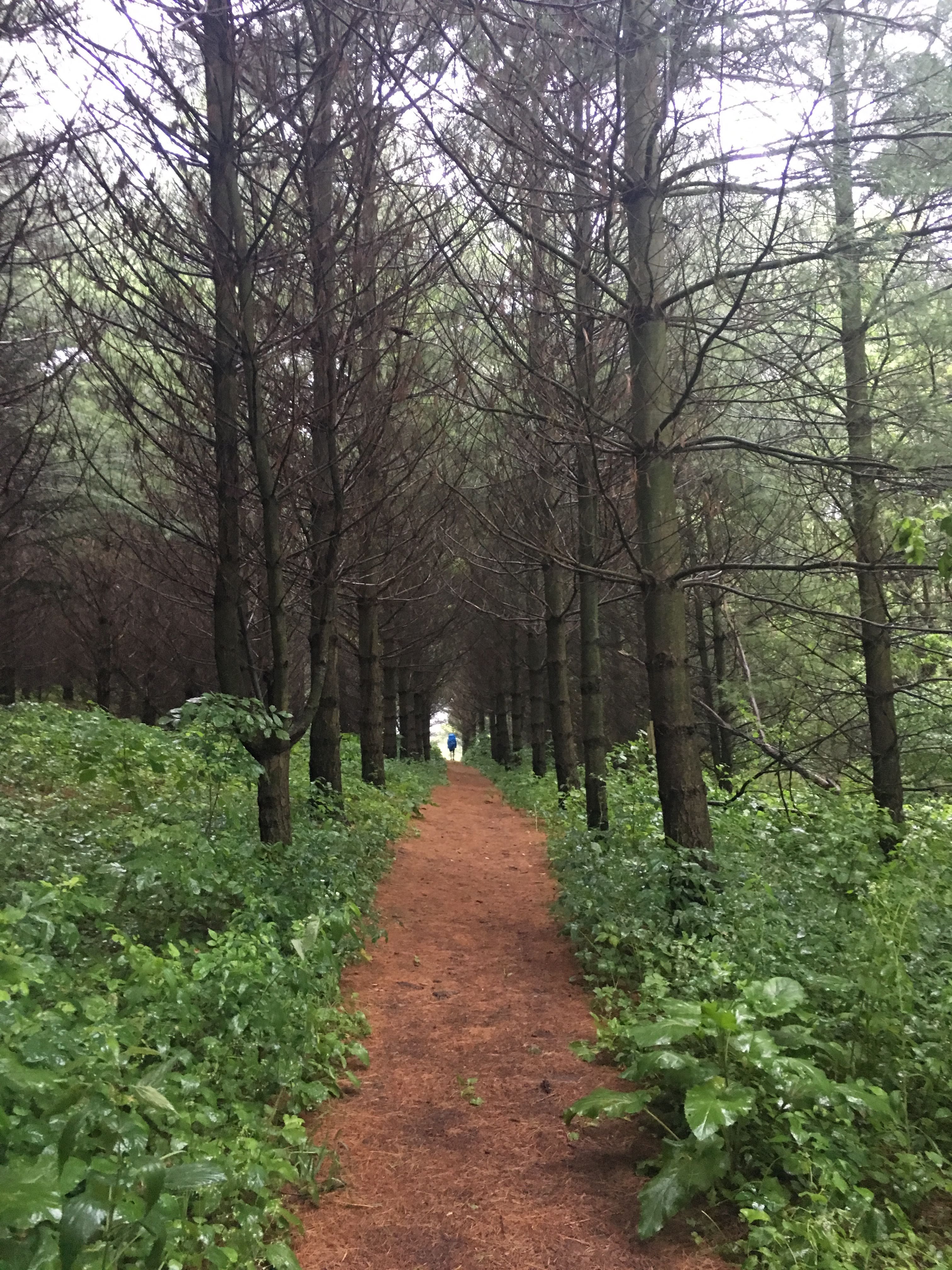 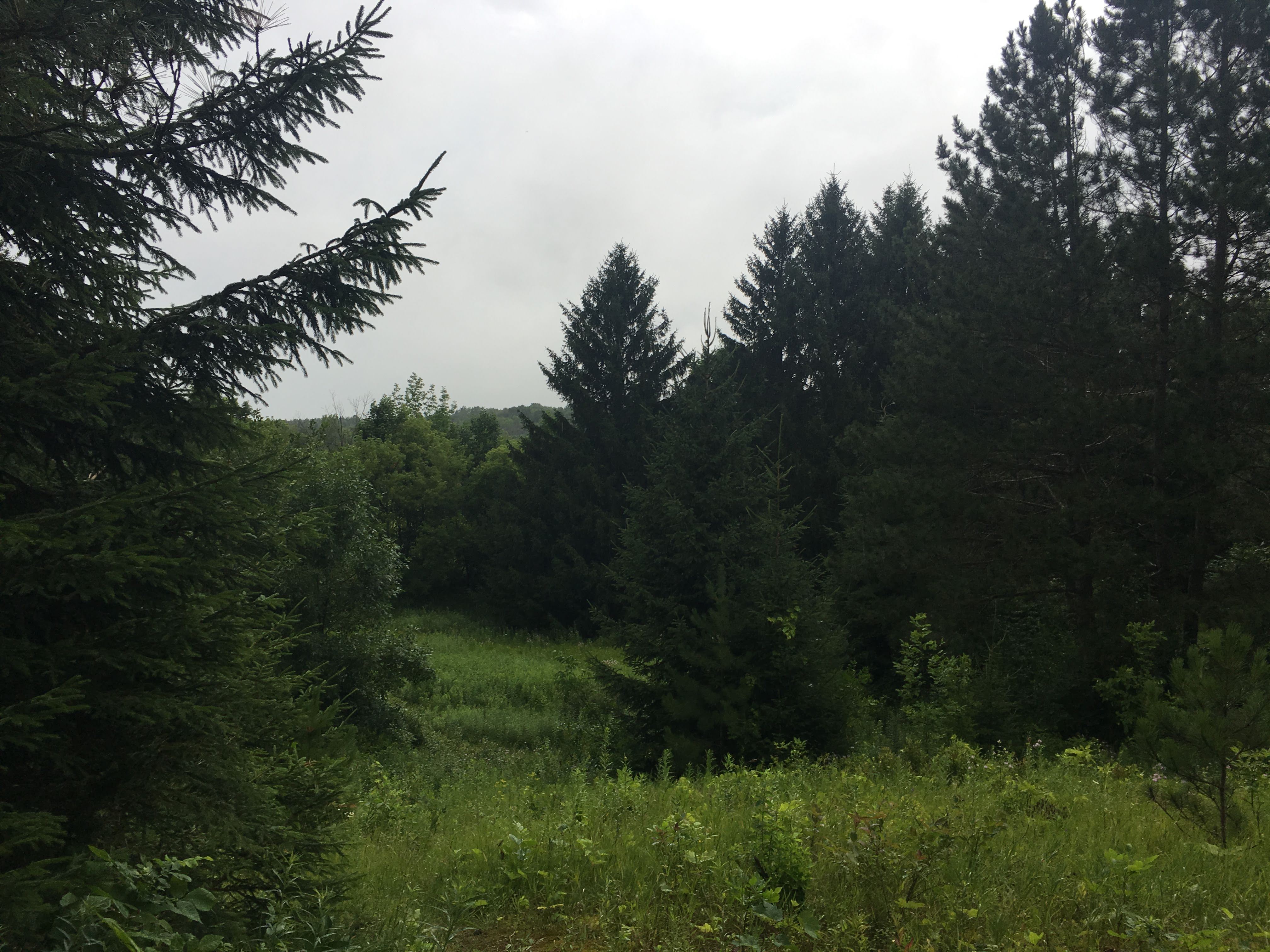 Certainly the greatest challenge of the entire section was crossing a rickety boardwalk over a bog. The walkway was pitched at damn near a 45 degree angle in spots. On one notably slick, graded spot, I actually slid off the bridge, and if not for some instinctual agility (and a lone tree in the water, for bracing) I would have tumbled straight into the swamp. 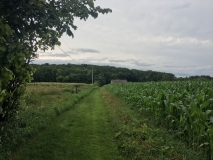 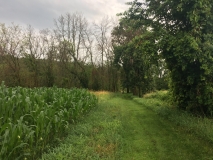 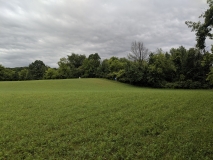 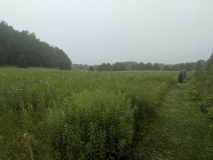 Nearing the entrance to the Pike Lake Unit park, we eventually found ourselves walking on Kettle Morraine Road for about a half mile, with Pike Lake on our left, and the swimming/boating area busy with several gatherings in shelters despite the weather.

I don’t have much to add about the Pike Lake Segment unfortunately. Due to the slowing but still persistent rain and shroud of darkness as we hiked through the woods, I was unable to observe or care about anything notable on the trail, and the group was particularly focused on pushing forward and getting camp setup. One of the aspects of the Pike Lake Unit that turned me on to it (besides the simple existence of campsite availability) was the multitude of trails within the park (roughly 15 miles worth) and observation tower. Ultimately, as we followed the signage that directed us toward the finish line that was the parking lot, the trails and observation tower were not deemed worthy enough to try out due to the weather. That’ll have to be next trip.

The Pike Lake Unit parking lot and our second vehicle were encountered at last, and the rain seemed to thankfully be slowing to a trickle. Dropping my pack off my shoulders, I noticed my flip-flops were not in the mesh side pockets (perhaps being brushed out in one of the thicker brush sections), and my bandana had apparently fallen out of my shorts pockets at some point. Bummer. Including the minor spur trail exploration, we covered almost exactly 12 miles from takeoff at the Loew Lake Unit.

Two members of the group headed out to pick up the second vehicle, as as well as some firewood from the Pike Lake campground, while the remaining party members enjoyed a cold, victory beer or three in the parking lot under a cool drizzle.

The three walk-in campsites were only around a quarter mile mile away from the parking lot; ours, B-3, was the furthest in. Near the middle site (B-2) is a shared pit toilet designated for use by all walk-in campers. Adjacent sites are a stones throw away with a small amount of tree coverage between for a hint of privacy. Most likely due to the rain storm, the adjacent site to us was reserved but went unoccupied overnight. This was probably a good thing, as our group was a little rambunctious and beer-fueled. Road noise was present in this part of the campground, which is a bit of a bummer, but overall these walk-in campsites proved roomy enough for many tents and hammocks. In the end, we felt rather fortunate for the rain; evening temperatures at camp were a bearable 65-70 degrees, so feeling comfortable by the fire and falling asleep at night proved effortless. After coffee and breakfast in the morning, everyone leisurely tore down camp by mid-morning and prepared for our drive back to civilization. 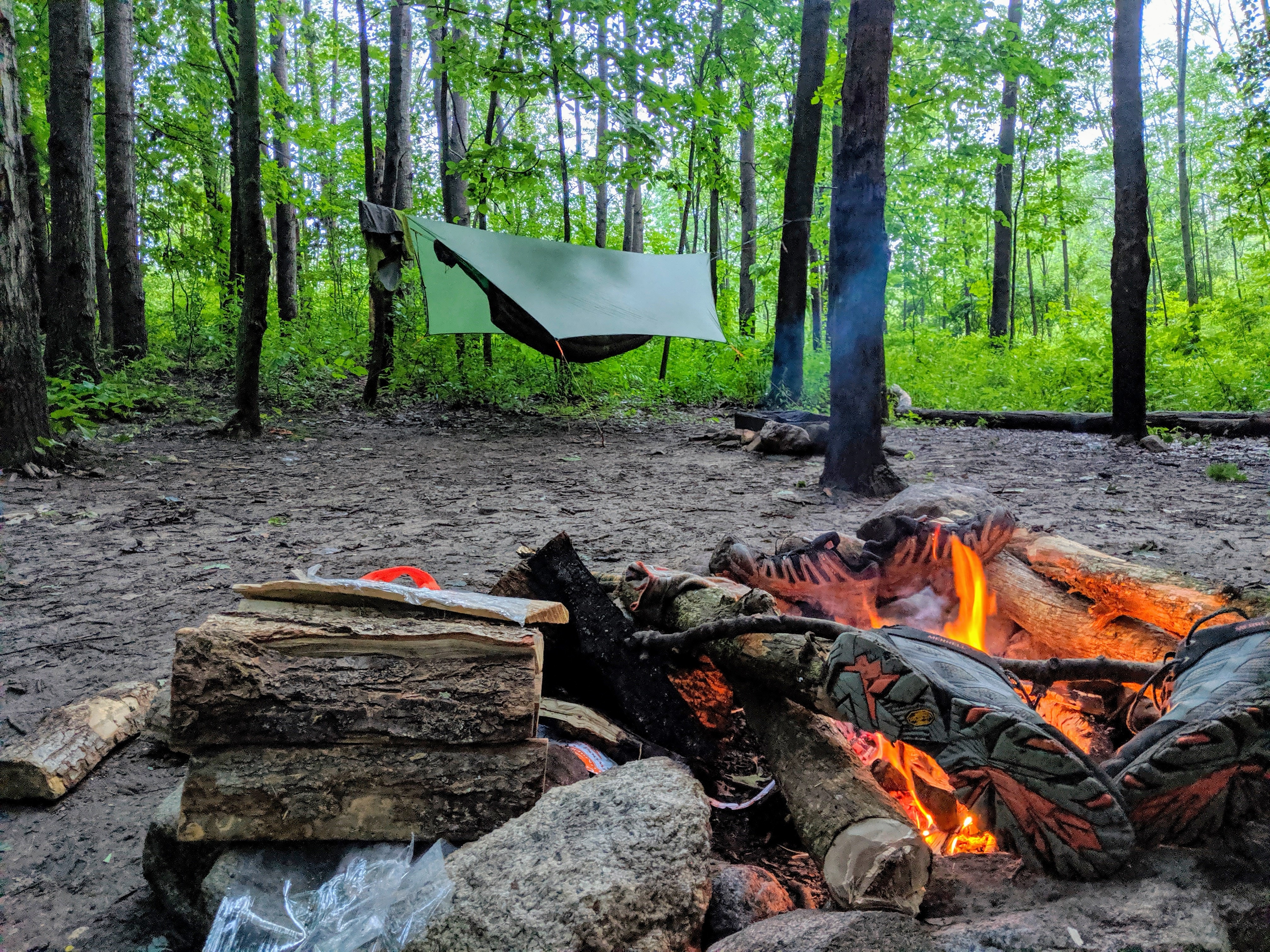 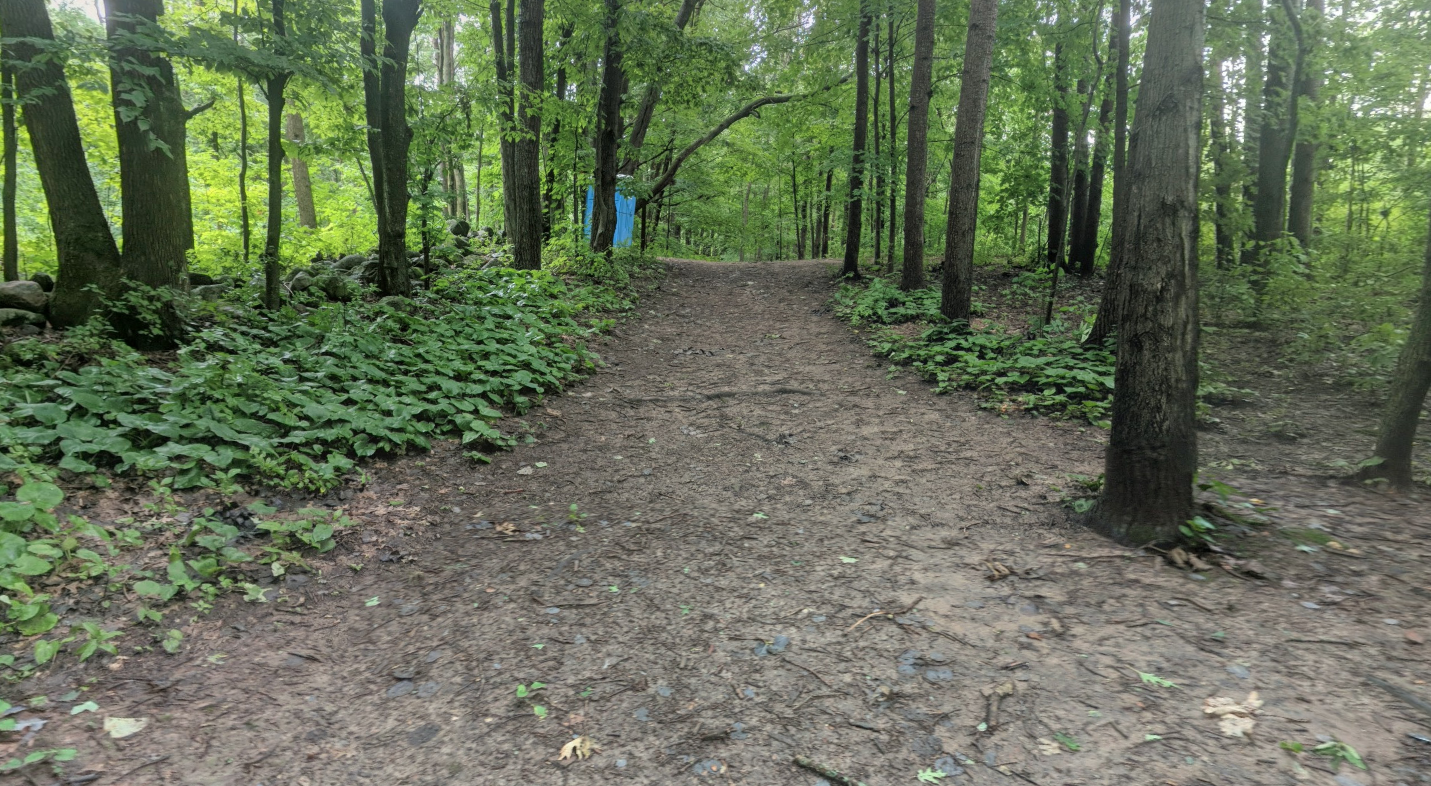 It was enjoyable to get onto a new section of the Ice Age Trail, and despite the inclement weather that dogged part of the hike, we were able to recognize the beauty of the Holy Hill segment in particular. The walk-in campsites at Pike Lake Unit served our backpacking group well, and I definitely see an upcoming Pike Lake camping weekend in the future with more opportunity to explore the trails and activities within the park.