Making our way from the Nicoya Peninsula, Ramona and I arrived in La Fortuna with her parents, rounding out the end of their trip with a few more happenings in the area, before welcoming numerous other guests to Costa Rica, all in La Fortuna. Yup, this was a busy time.

On one of their last days in the country before returning to the states, Ramona’s parents Donna and Troy drove with us to El Castillo (The Castle). The tiny volcano village consists of no more than a few shops or attractions, a few restaurants, and some exceptional views of Arenal. The location is perhaps worth staying at if nothing else for its general tranquility, and proximity to the Arenal Volcano National Park and all of its trails, though at a 40 minute drive from La Fortuna itself, there is certainly a tradeoff.

We stopped by the Fusion Grill restaurant in town. While offering a pretty ordinary menu, it more importantly provided an amazing perspective on the volcano from its balcony as we ate. 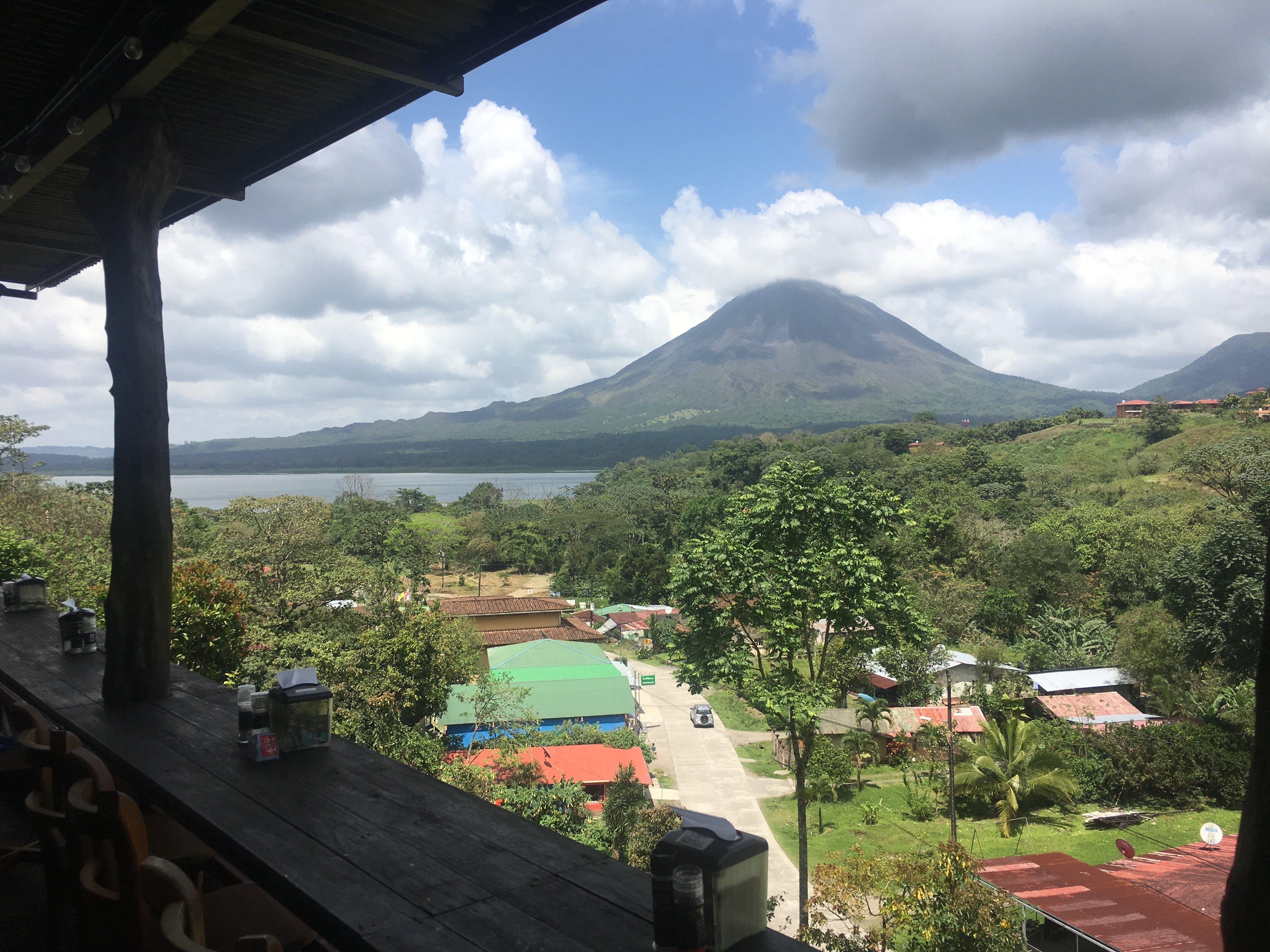 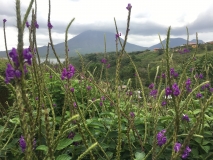 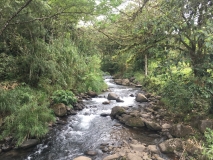 After Ramona’s parents left, we downsized into some new digs just a few blocks from Fortuna Park in the city center. For about a week and a half we stayed here, hanging out with more visitors to the area (Ramona’s good pals Suzy and Mike), while otherwise mostly focusing on work, doing battle with large cockroaches in our rented home, and trying to get some sleep despite the abundance of roosters and loud families in adjacent domiciles. In theory, this should have been a relaxing recovery period in preparation for more traveling, but it did not exactly end up that way.

On our last day, we packed up and switched to another casa, a more typical Tico house in a neighborhood about 1 KM from the city center, where we waited for Jess and Sherié to arrive on separate shuttles from San Jose. 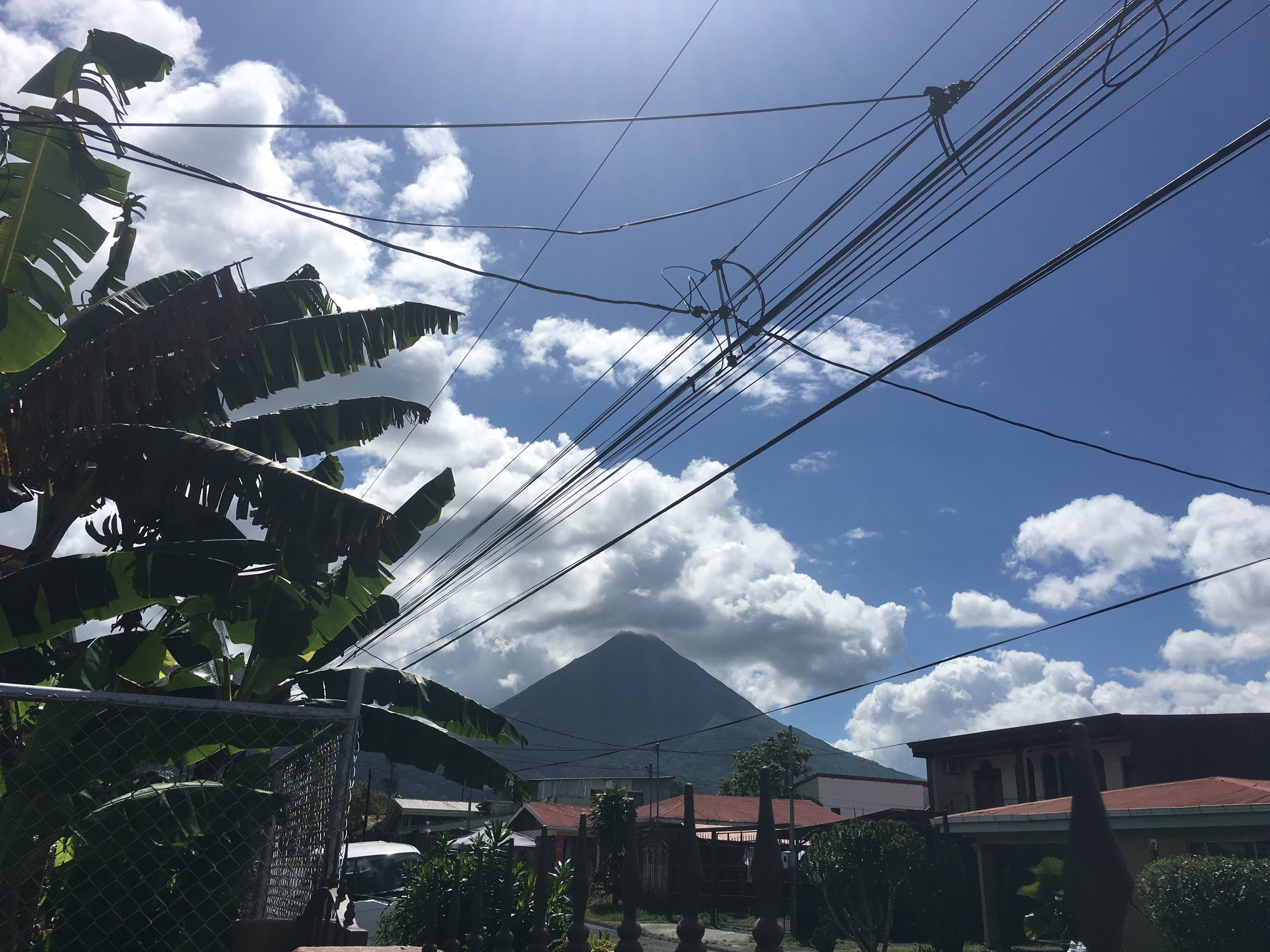 View from our front yard 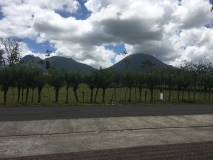 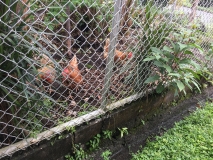 Sherié is very well-traveled n the region, so it was intriguing to hear her initial account and comparisons of Costa Rica to other Latin American countries as she bussed through the heart of the country. Jess, filled with worldliness, was about to experience her first rodeo in Central America.

After a laugh-filled Italian dinner and a movie on cable TV, we settled down and readied ourselves to explore more of what La Fortuna had to offer.

Just a 10 or 15 minute drive outside of town, the La Fortuna Waterfall is one of the most frequented destinations in the area by tourists and locals alike. Due to an ankle injury and other events, Ramona and I had been unable to visit the waterfall during our previous stay. Thus, we were excited to visit with Jess and Sherié. We pulled in just after the 8 AM opening time, and by the small number of cars in the parking lot, it did not appear crowded. As we paid the $15 apiece dollars to enter the waterfall area and descended the first of around 500 steps down to the falls (here is my GPS route of the walk down to the falls, about 1/2 mile). Around 15 minutes later, the goal was attained, and sure enough, it was just the four of us. 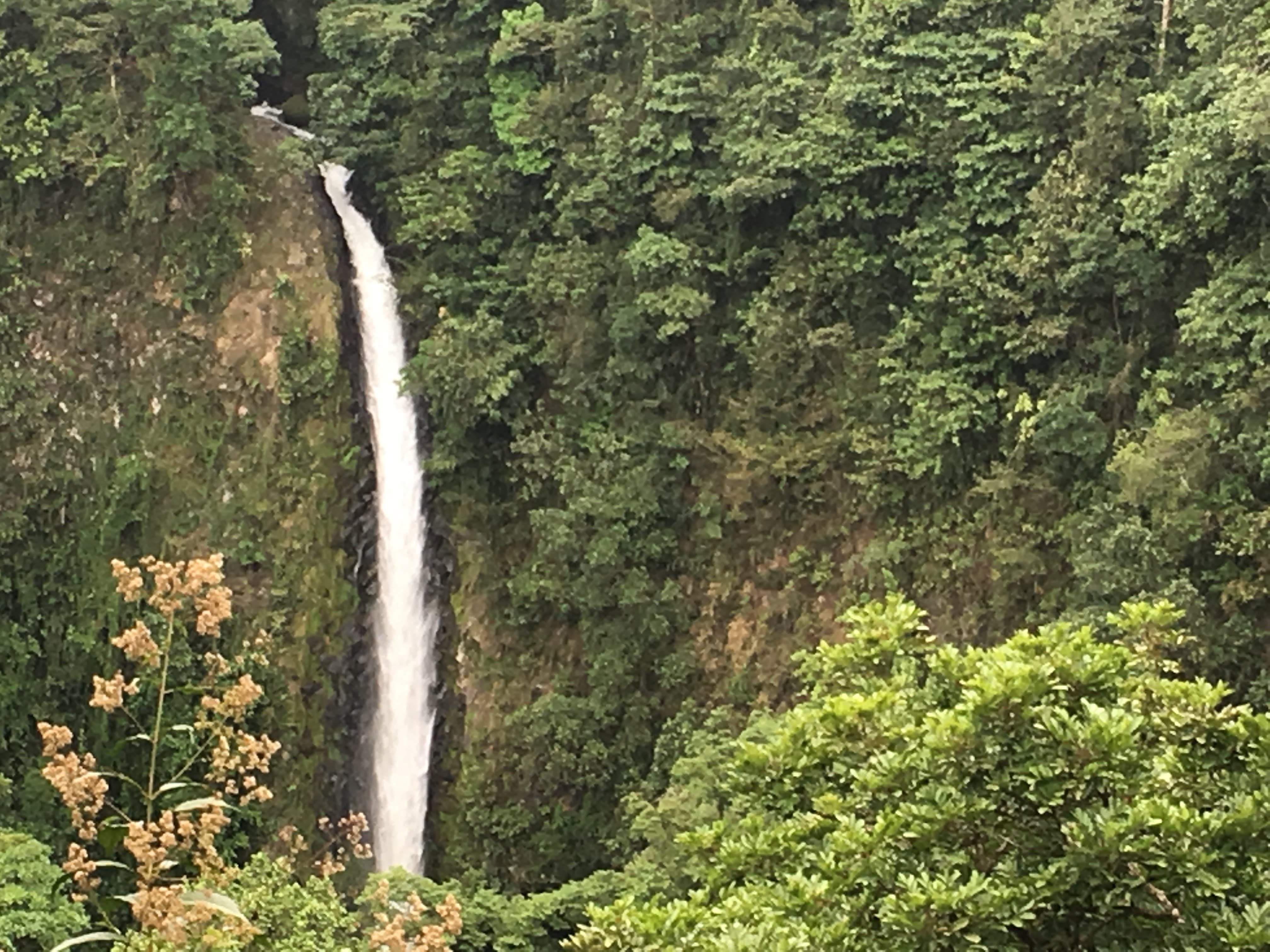 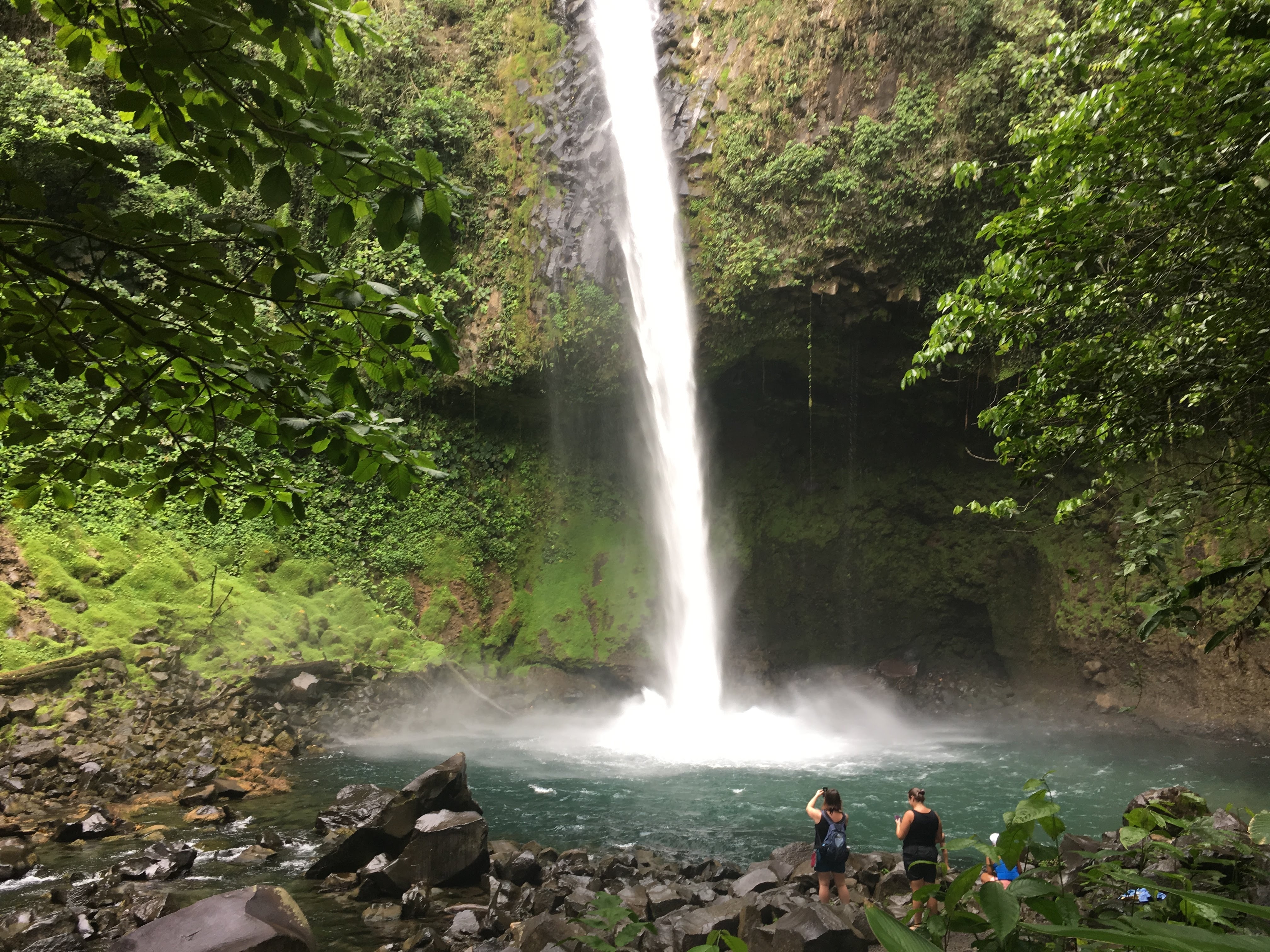 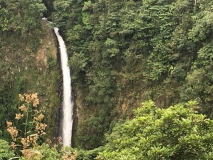 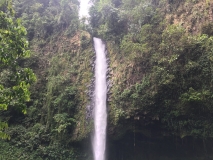 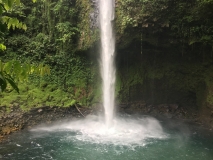 We swam in the brisk water for a while before a couple of other visitors joined as we finished up. At tourist attractions, timing is everything, and our early arrival made this a special visit, on our travel companions first morning in the country.

It was notable to me that the attraction had an ample parking lot, and some great bathrooms and changing areas for those that decided to dive in at the waterfall. Normally this is not worth expounding upon, but as many tourist areas in this part of the world lack restrooms with an actual toilet seat, I feel okay pointing this out, as a substantial positive part of the experience.

After having great fortune with our adventure to the La Fortuna waterfall, we tried our luck with another waterfall the subsequent morning, at Rio Celeste.

As I said before, timing is everything at tourist attractions. In perfect conditions, the Rio Celeste and its waterfall showcase a brilliant, blue hue in their waters. It’s clear why folks would want to visit.

However, as we drove to the trailhead, a cold, dense rain began to take over. Pulling our rental into the parking lot, our group was disappointed to see a hundred other cars (give or take) already present, and a large line of poncho-wearing tourists forming. This was nothing at all like the start of our La Fortuna waterfall experience! After waiting in line and paying $15 apiece, we began hiking the trail. It was muddy and slippery, and with a small but steady incline, the wetness made the .9 mile trek to the waterfall vantage point more arduous than I expected; the group was perhaps a tad charmed to reach the top without any twisted ankles. As we neared the lookout point, we encountered numerous other soaked hikers on the return route, looking rather disappointed. Due to the persistent rain during the previous day and that morning, runoff had contributed to the river and waterfall’s dirty, brown appearance, as we discovered soon after. Now, brown is my favorite color, but more of a retro, 1970s brown. The payoff wasn’t worth it, and while additional trails were available extending from the lookout point, no one in our group was finding the desire to continue due to the conditions. Eh, you win some, you lose some. 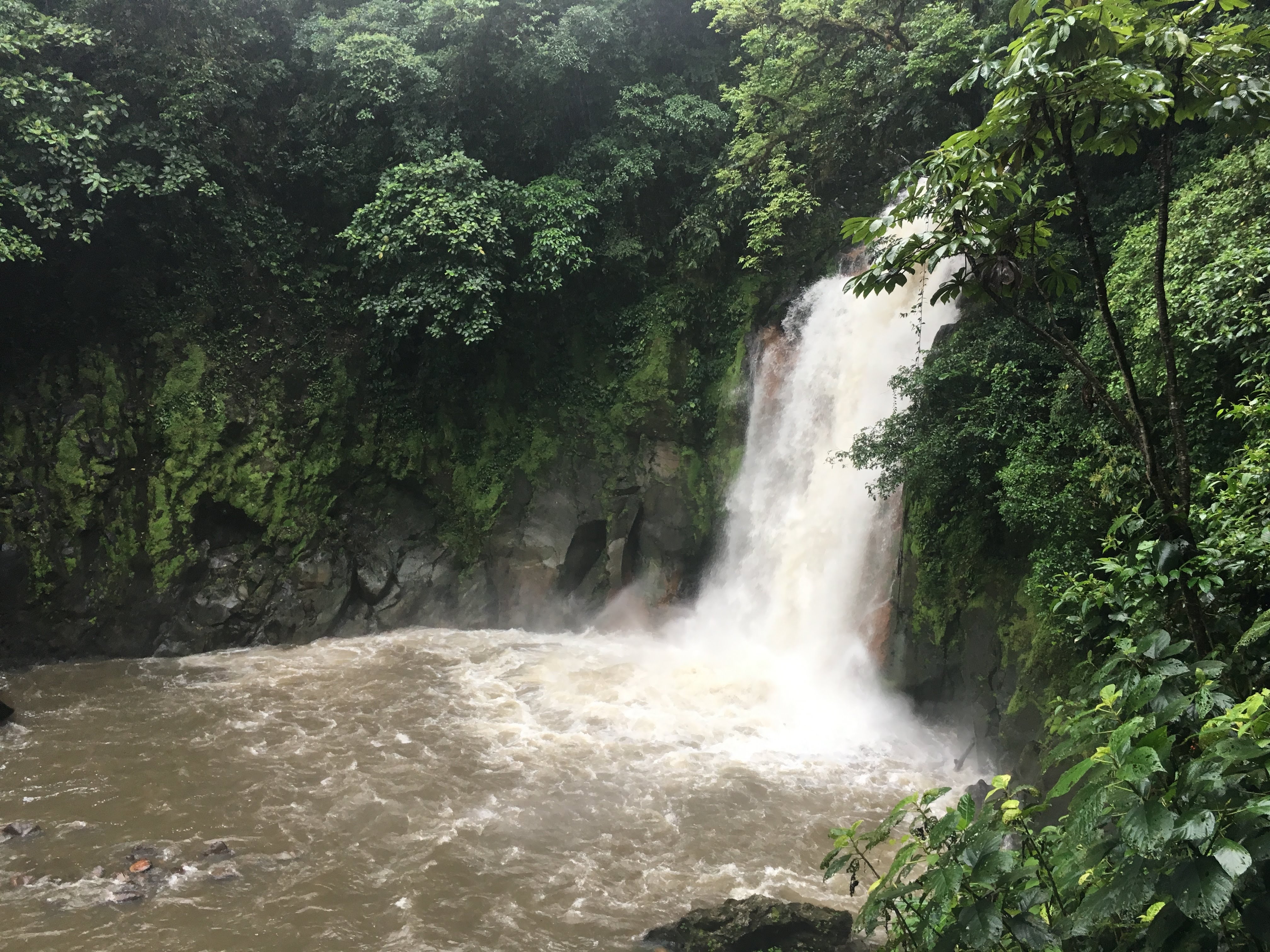 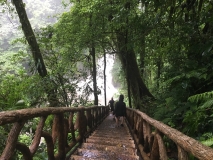 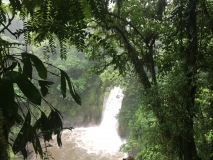 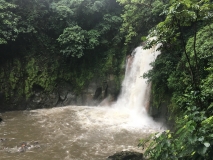 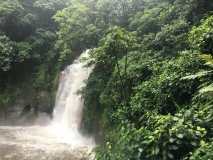 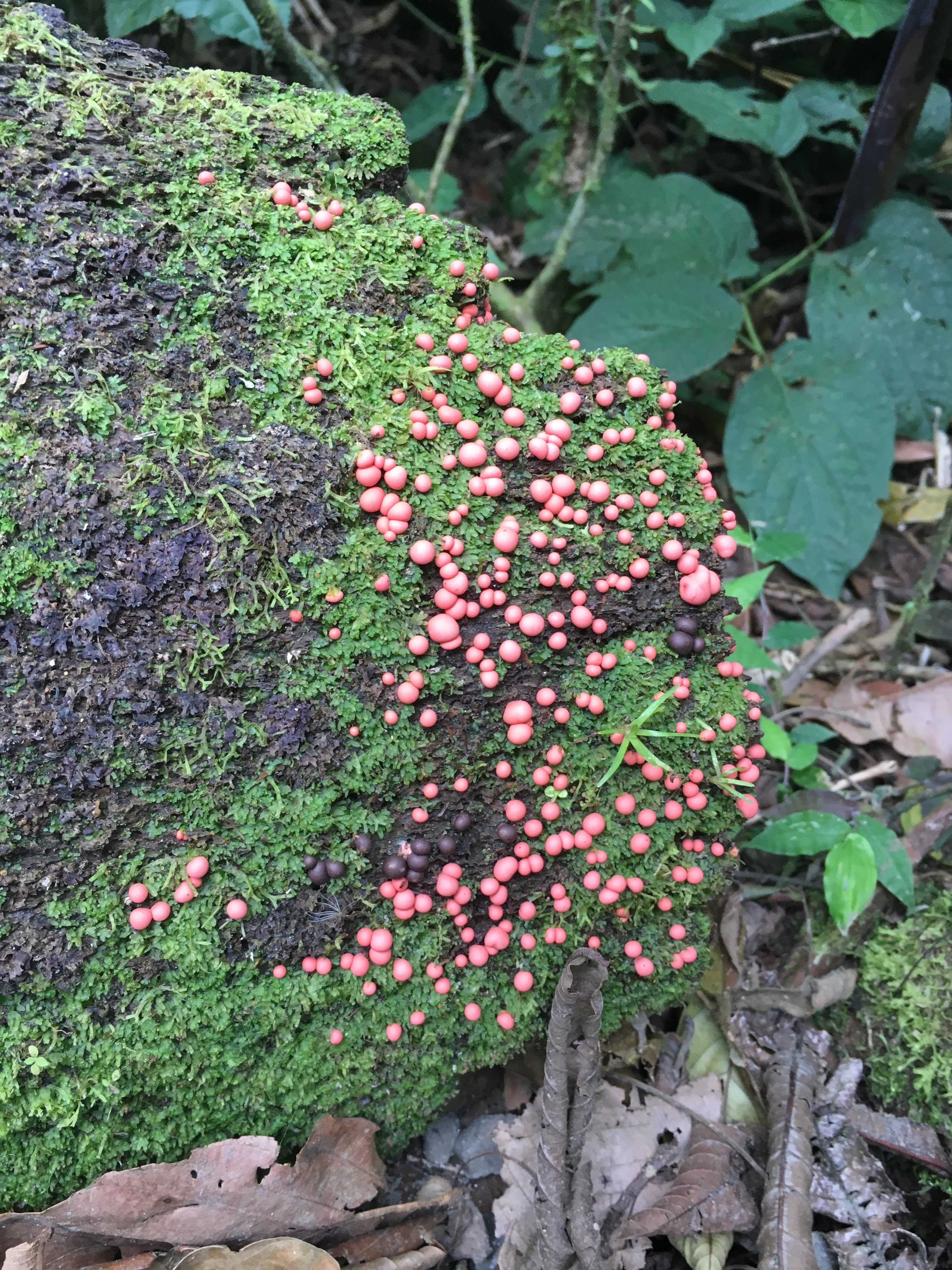 I don’t know what this was at the edge of the trail, but it looks like Nerds candy. It tasted fi

Ramona and I tackled the 1868 Arenal Trail back in September, and while Sherié and Ramona visited El Castilllo, Jess and I went for this hike. This is one of my favorite basic hiking trails in the country. The main loop is 3.25 miles in length according to my GPS tracker, with some minor elevation drops and falls and a nice little workout in the middle of nature. While not packed with wildlife on this occasion, Jess and I did spot a toucan, and eventually pursed several more that flew near us along the trail as we neared end of the loop back to the parking lot. A local guide at the end had also wrangled up a small pit viper for our viewing pleasure.

After splitting in two groups in the morning, our foursome reconvened in the afternoon and walked the newish La Peninsula trail (also sometimes referred to as Los Miradores). Finding this trail requires driving past the visitor center at the 1868 trail. Why does it require an additional $15 if we already “entered” the national park area and paid to access that trail? I’m not sure, but that gouging felt rather unnecessary. We learned this fact at the entrance, but decided to forge on anyway. The long paved trail is only about 2 miles long (round-trip), and is one of the rare options in the area that may be explored by those with mobility issues. This was the first live view of monkeys for our travel companions on the trip, as a group of spider monkeys swung from the trees above as we walked. 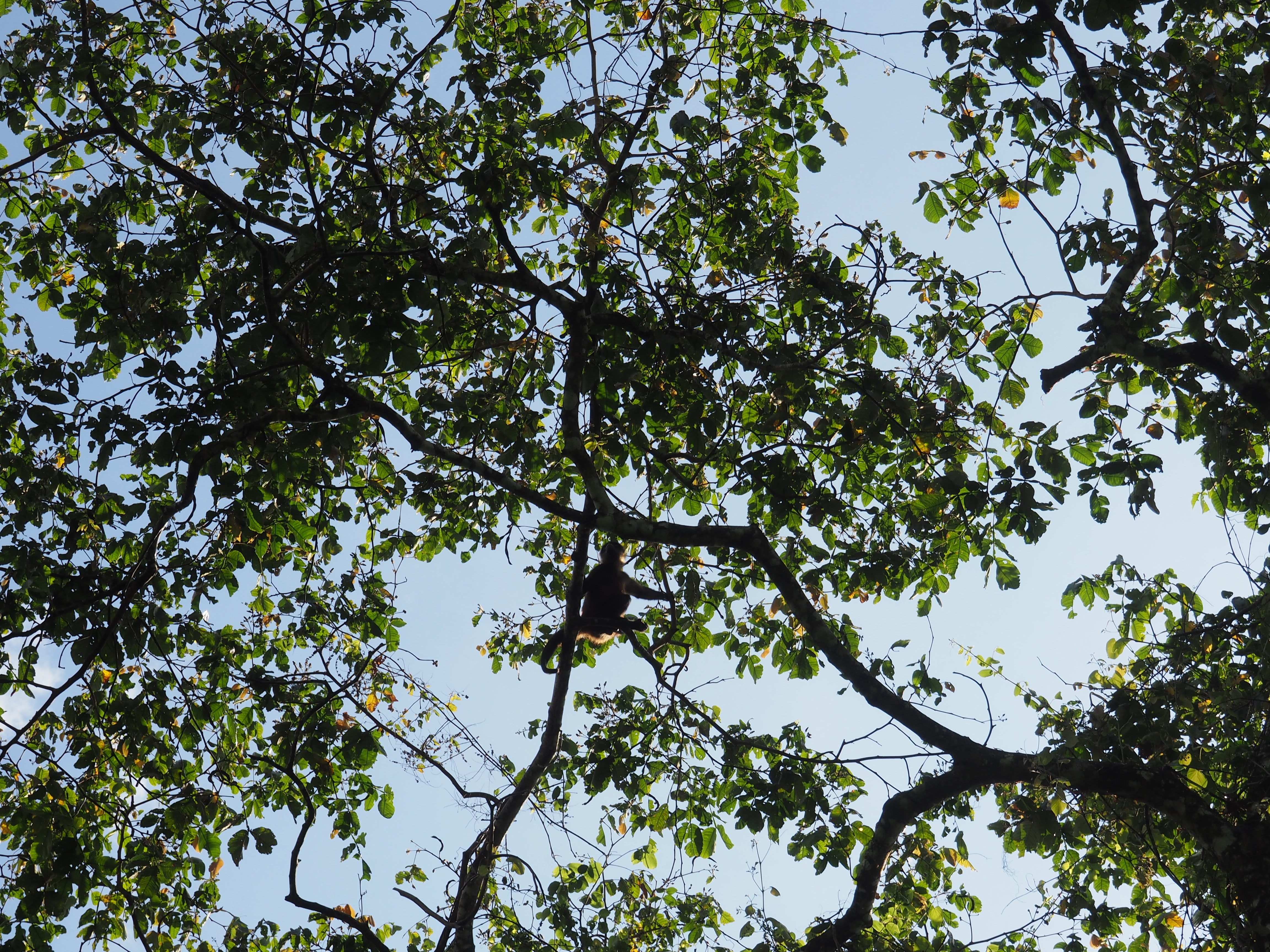 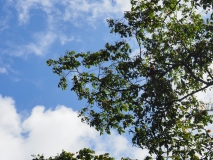 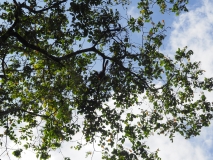 There are several pleasing vantage points of the volcano during the path. 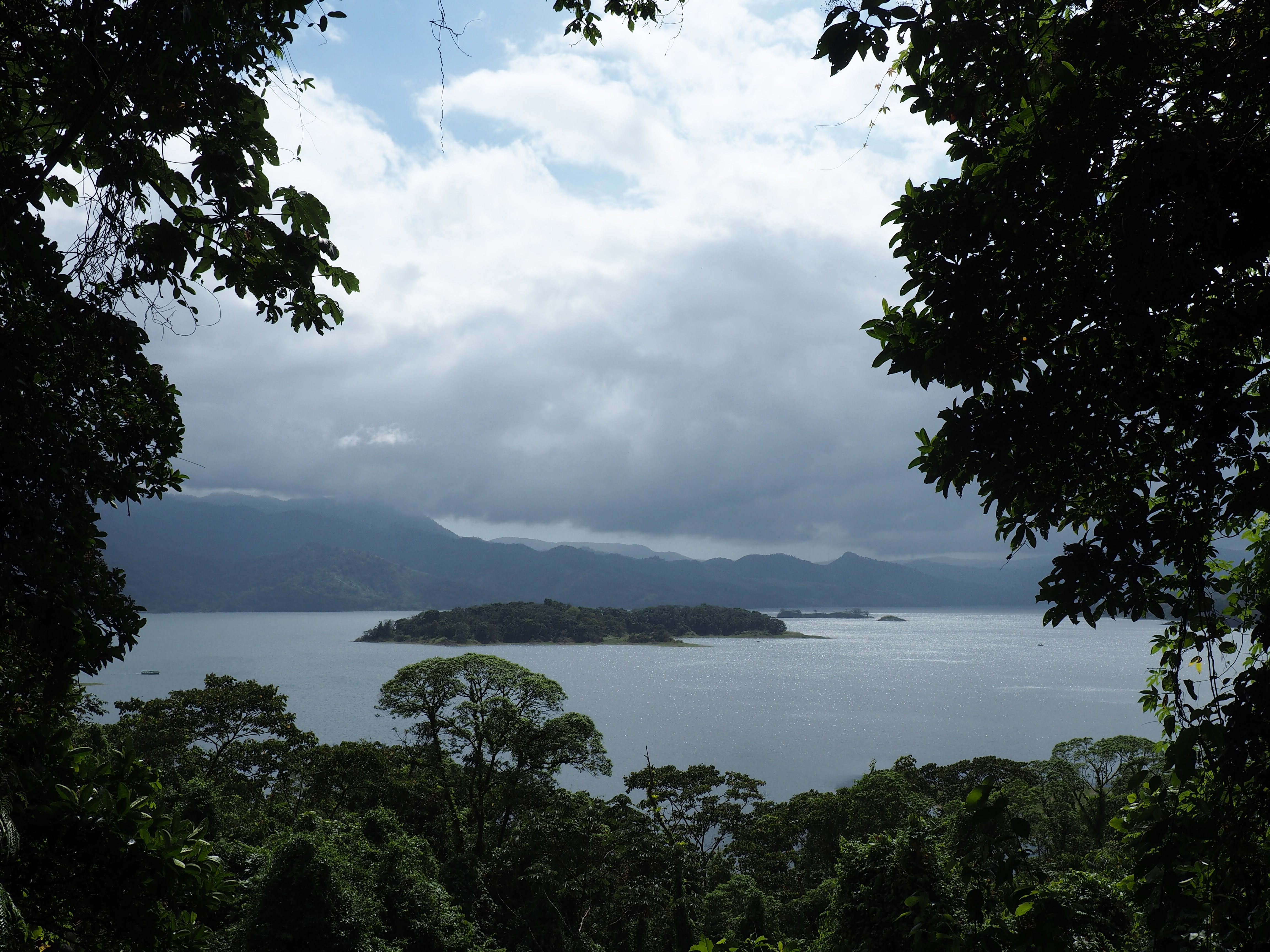 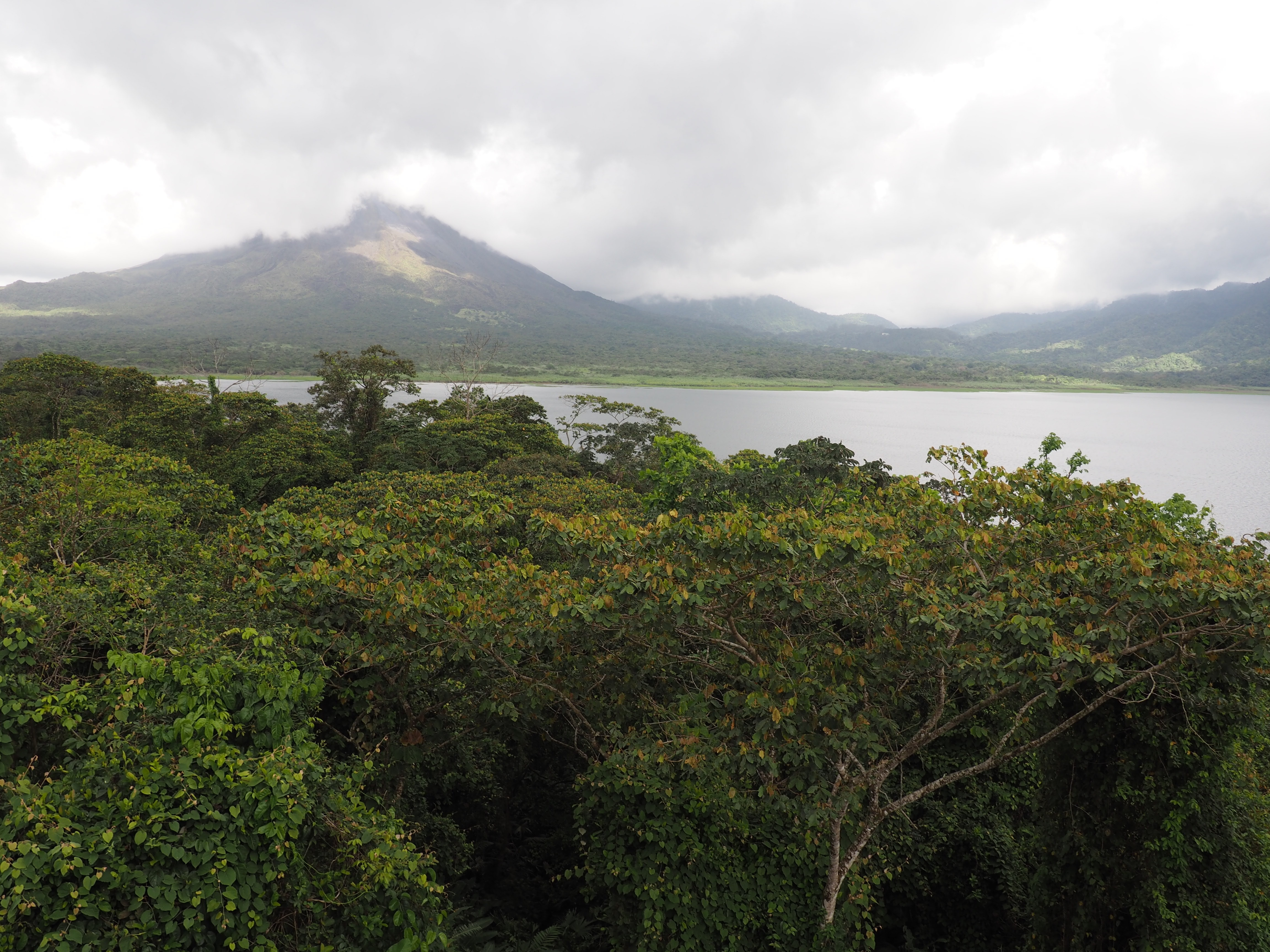 At the terminus of the paved path is a small wooden deck looking out over the shore of Lake Arenal. After a brief stop before heading back, it was at this point that a rather remarkable thing happened, in which an arbitrary, foot-sized hole in the deck enveloped Sherié’s foot. If you’ve never seen someone step in a hole up above their knee, you’re missing out. Regrettably, we were in such disbelief that no photos were snapped. She was slightly injured but okay, by the way. I cannot imagine many tourist locations in the US that would have a hole in the deck that wasn’t roped off or blocked off by a cone. Bienvenidos a Centroamérica! (Welcome to Central America!) 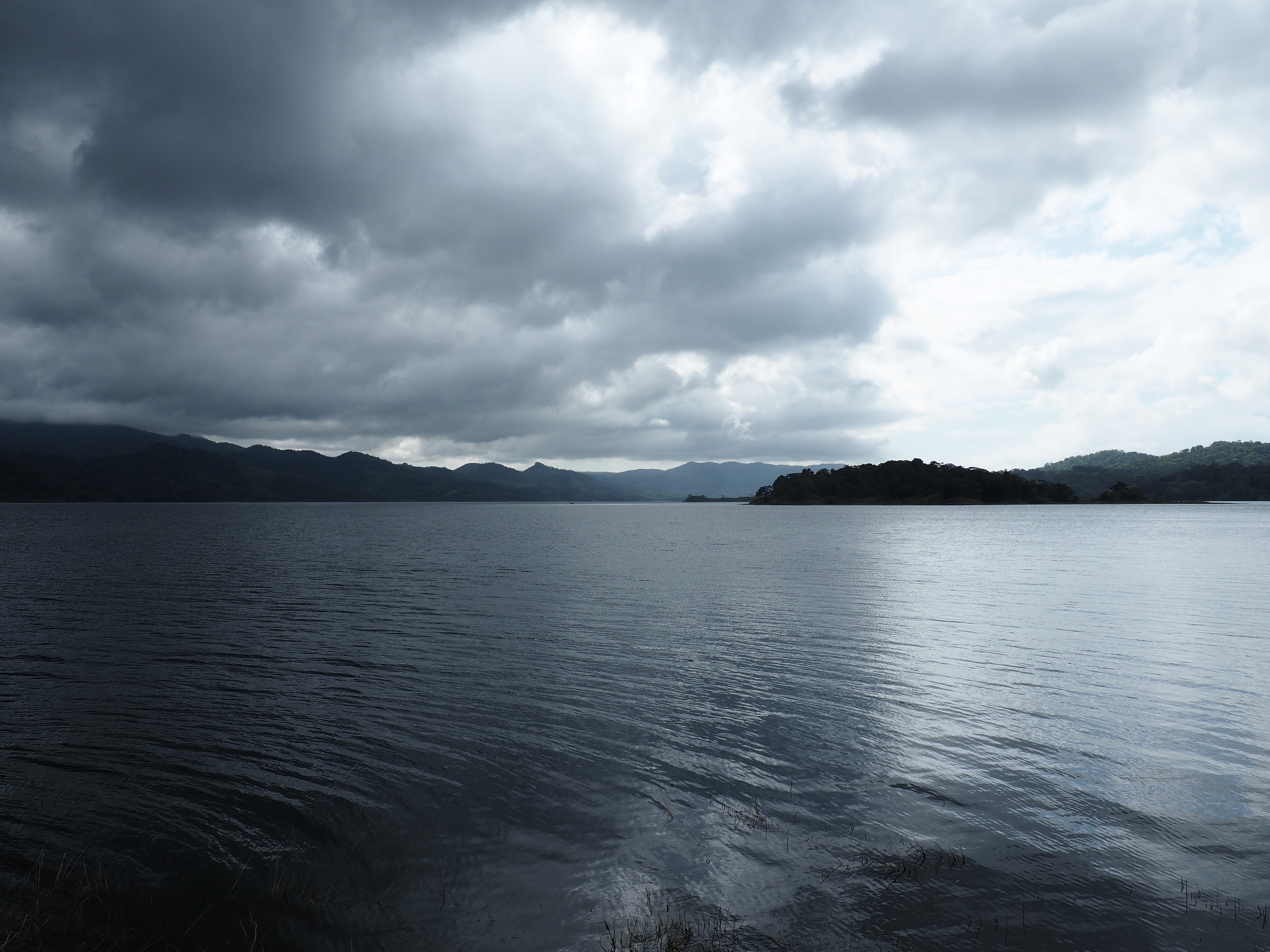 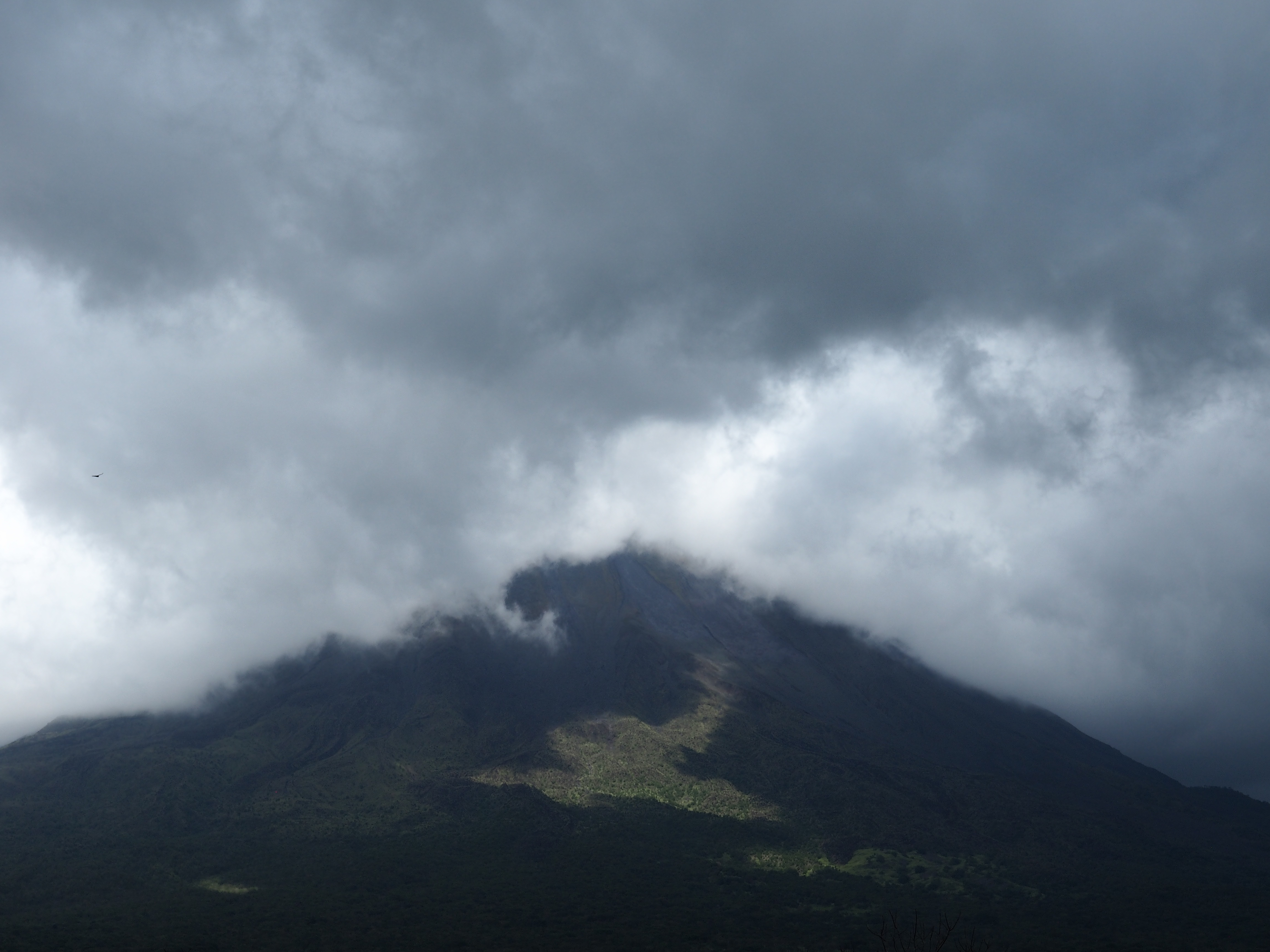 Next Up: The Pacific Coast

Arenal gave Jess and Sherié a solid first leg of their journey in Costa Rica, but it was time for the four of us to load into our rental vehicle, exit Volcano Mode, and venture off on a road trip through the heart of the country toward the Pacific coastline. 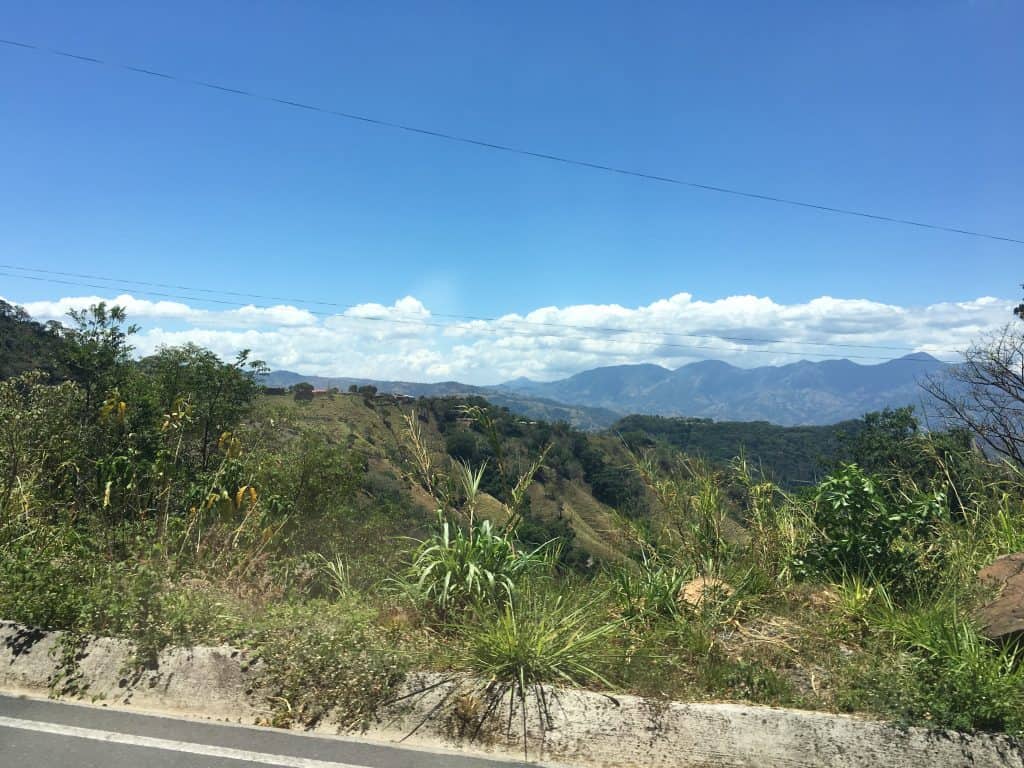