Ramona and I departed Tamarindo for our next destination on Friday, September 15th, which also happened to be Costa Rica’s independence day. Our shuttle ride was a little more interesting than anticipated; there were parades and other celebrations occurring along our route, sometimes blocking the road and causing minor delays.

We were taking a brief reprieve from the beach to enter “volcano mode”, as Ramona coined it, by staying in the shadow of Arenal Volcano (Volcán Arenal), in the small town of La Fortuna de San Carlos, more commonly referred to as La Fortuna. This would be a ten day stay, our longest in one place to this point. 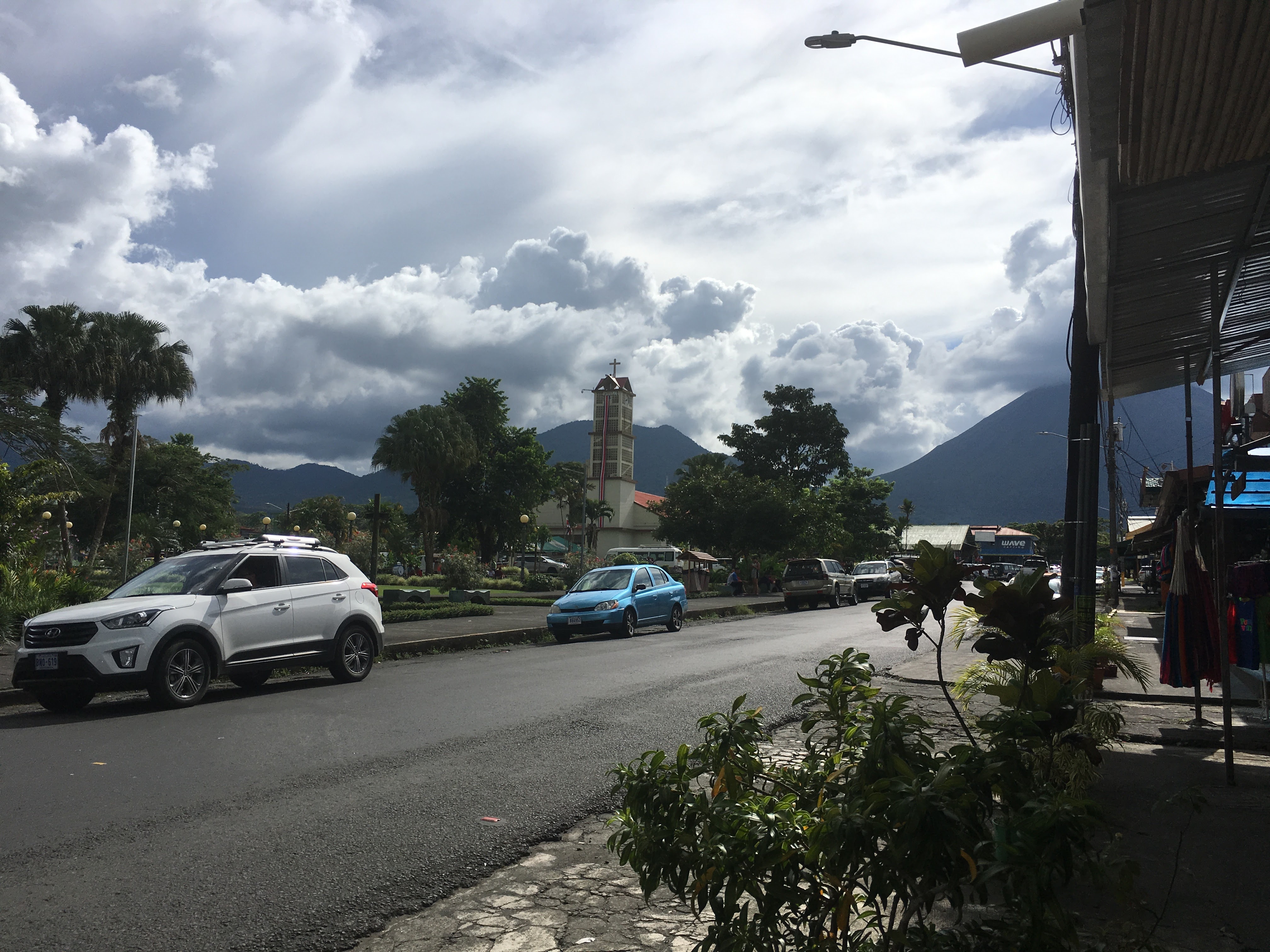 In addition to the (now familiar to us) pastures and bumpy, winding roads, as we approached La Fortuna, the horizon becomes dotted with wind turbines, harnessers of the second largest source of electricity in the country. The leading source, hydroelectricity, comes in large part from Lake Arenal, which is just around the bend from there. 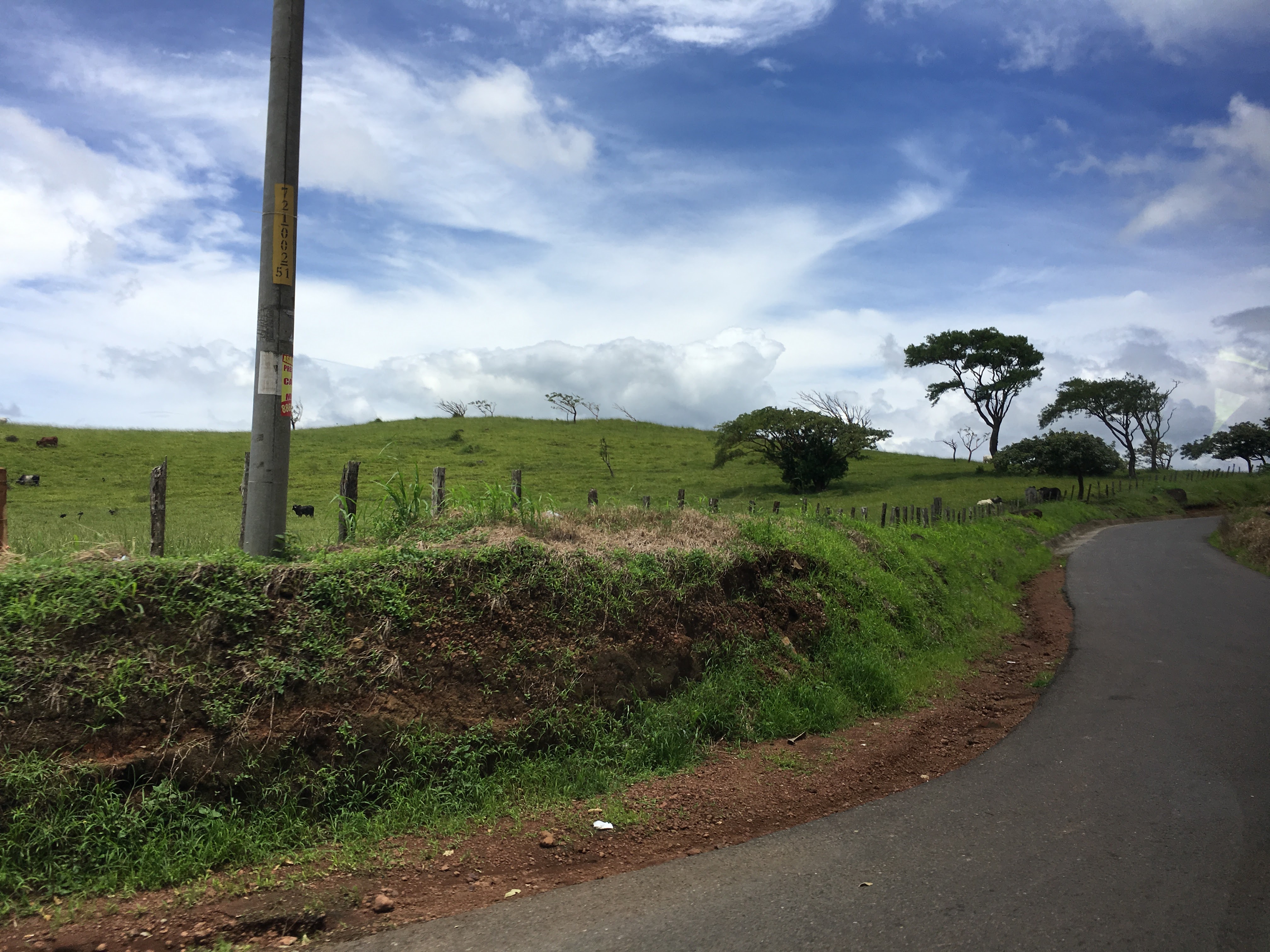 We arrived to our accommodations: a cute little house in a neighborhood on the outskirts of town, with two bedrooms, a washer and drier, and a separate office.

The office provided plenty of room to spread out and get to work during the week.

We walked from our new quarters to the town center to get acquainted with the area, grab dinner, and pick up some groceries. This is the typical view when walking down the long road toward town: 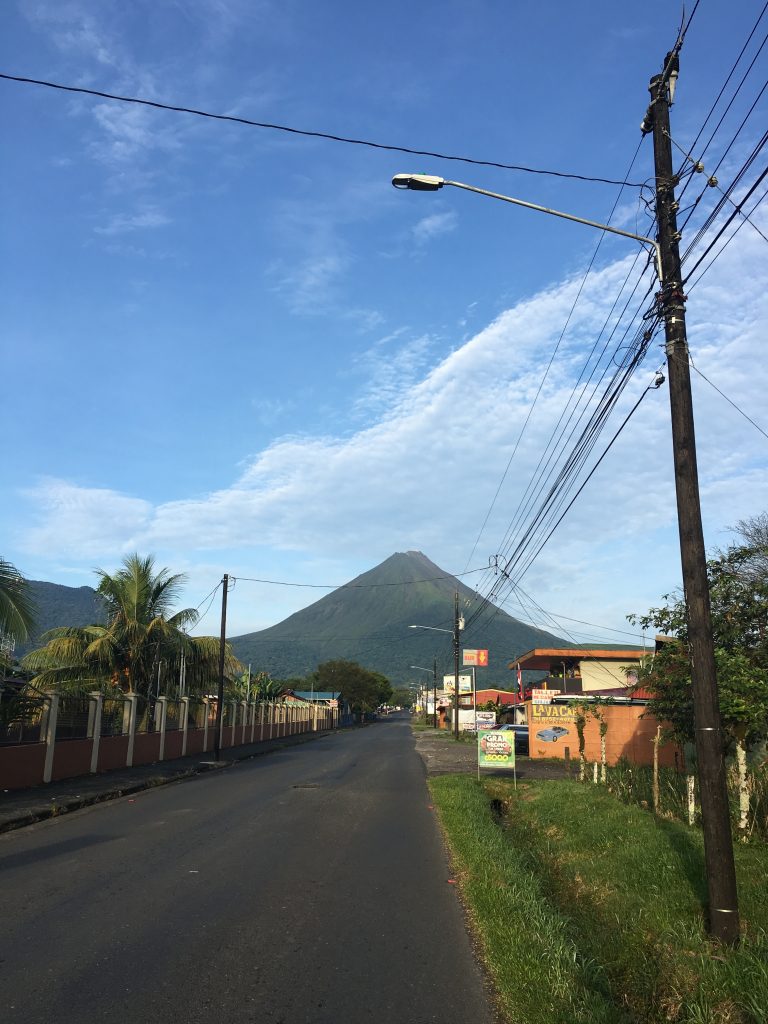 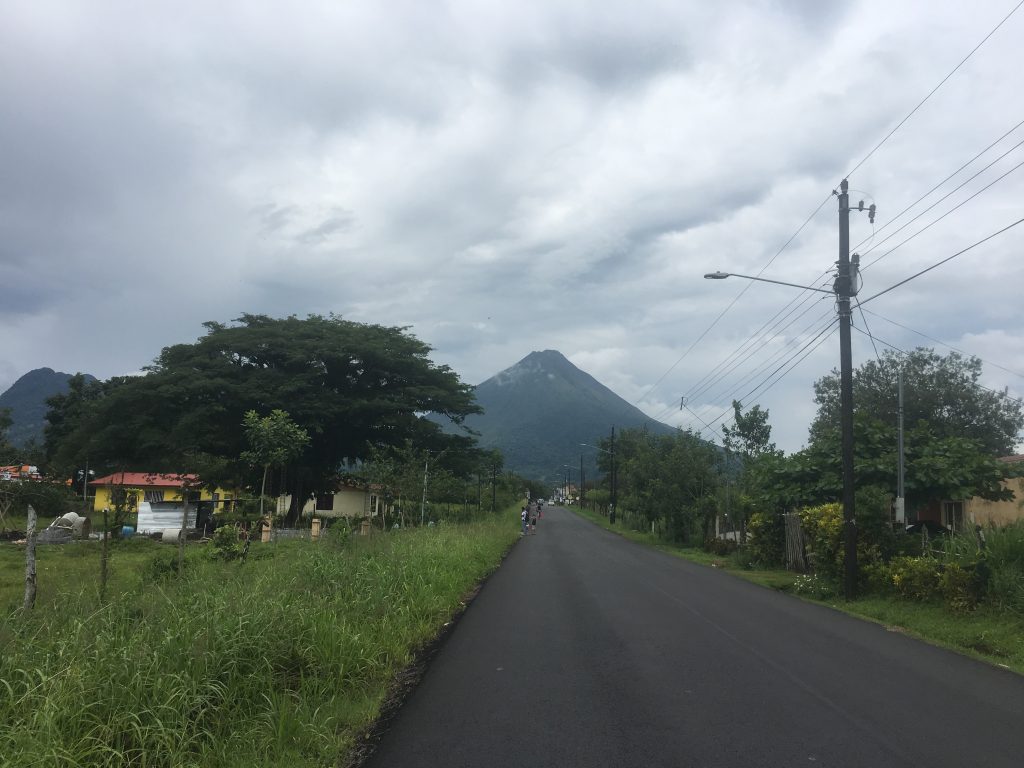 As we learned during our stint in its shadow, visibility of the near-perfect conical shape of the volcano varied rather widely. Some days, the sky near the peak made the the volcano difficult to see at all; other days, the view was crystal clear. Arenal Volcano has been dormant since 2010, but before then visitors might be treated to visuals like the following. 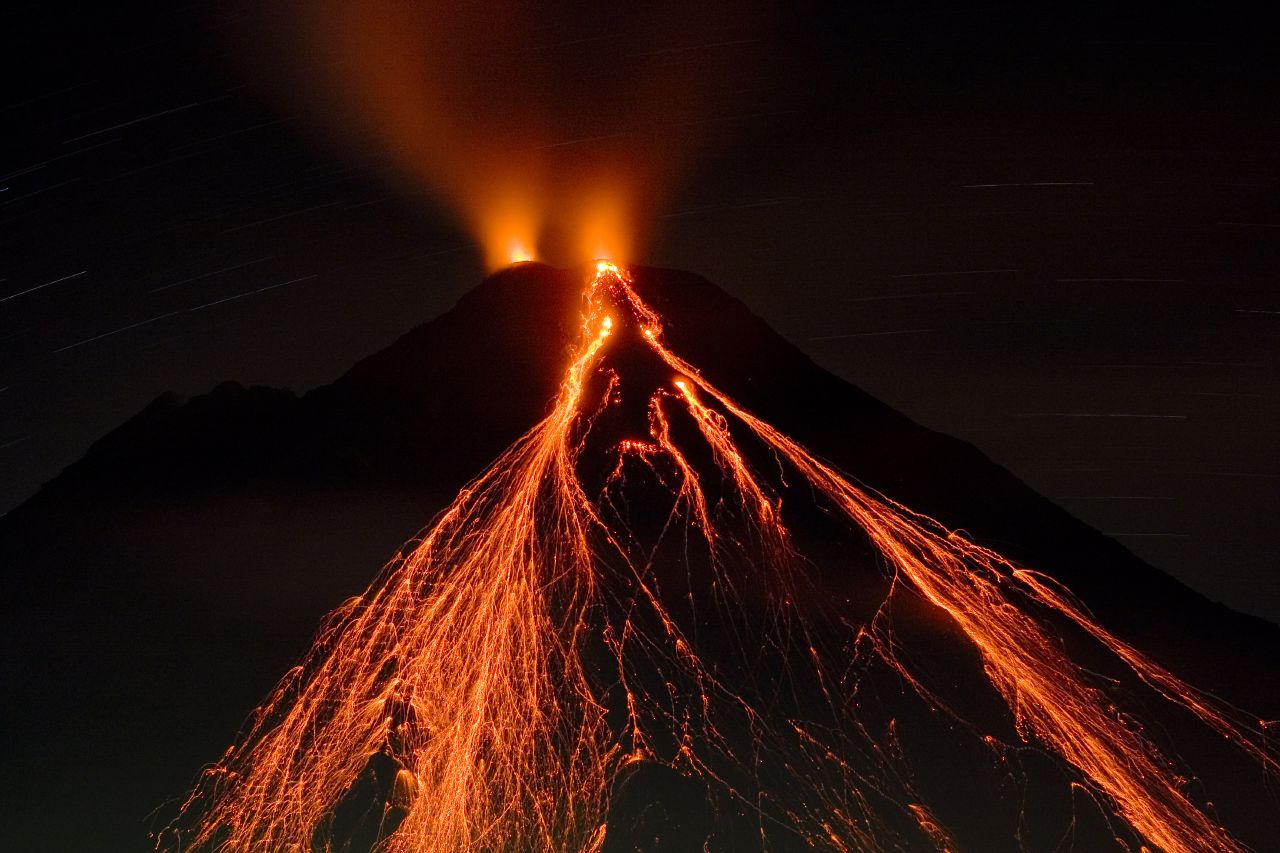 Due to exhaustion from traveling, our first night in La Fortuna concluded fairly early, although the same could not be said for many locals. Fireworks were launched in the town center into the late hours, good times were undoubtedly had, and the town vibe was rather more subdued the next day as folks rested and recuperated from much food and drink.

The volcano looked impressive from town, but we wanted a closer look, and opted to try some of the nearby hiking trails, as well as some natural hot springs. Ramona and I discovered that these are all at least a 20 minute drive from La Fortuna. We also discovered that the cab drivers are well aware of this distance, and based on their rates, they are making a killing. With that in mind, renting a car seemed like a reasonable idea. Also, that walk into town, while scenic, starts to become less bearable in the middle of a humid day (hint: this is every day), where one’s shirt could be drenched within minutes…and that’s on the days where it isn’t pouring rain. Sometimes, it’s nice to shop for groceries or head to the city center for a nice dinner without being soaked.

Our first experience renting a car was straightforward from an Alamo branch, although in Costa Rica there is definitely a markup if you rent an automatic transmission rather than manual. The other aspect to consider when renting is whether you need 4 wheel drive or not. I would say that any adventure (hiking trail, waterfall, scenic view) that is slightly off the beaten path is more than likely to require a 4×4. It is definitely a necessity to do the research ahead of time.

A favored attraction for tourists near the volcano are the natural hot springs (agua termales). There are quite a variety of ways to experience some sort of hot spring in the area.

With our newly obtained rental car, Ramona and I opted to evaluate some of these options (not the mud thing this time – been there, done that).

First on the agenda was Ecotermales. We arrived early on a Sunday, and over the course of the day, encountered no more than a 15-20 other guests at the spa during our duration there. Mostly these were Tico families relaxing as they finished up their independence day weekend vacation. The business actually limits the number of people it lets into the springs, so even at full capacity, I suspect it still does not feel incredibly crowded. There are numerous hot springs at varying temperatures, and they are nicely nestled into the surrounding natural elements. There is also a bar and a couple of small restaurantes on-site if you’re making a day of it solo, as a couple, or small family. Ramona and I highly recommend Ecotermales as a great way to spend a morning or afternoon in a relaxed state.

Later in our stay the two of us checked out the Los Lagos hotel hot springs for a quick diversion after a hike. This is one of the larger, family-oriented experiences mentioned previously. As such, there were plenty of water slides, cold swimming pools, spring water pools and private tubs, and even a swim up bar/restaurant. There was also a hot water slide that necessitated my testing, which I must say, feels peculiar when you’ve been sliding down cold water slides for your entire life. This would not necessarily be the recommended hot springs destination for those looking for a quiet, calming repose, but for a family looking for a little bit of everything it would fit the bill. Ramona had also brought a group of students to Baldi, a hot springs resort just down the road, and considers it fairly similar in terms of the atmosphere and features.

Of the trails (or senderos) that we hiked, we recommend the Arenal 1968 trails for visitors looking for something moderately challenging. There are two mapped out trails that can be followed. The longer, steeper, 3.5 mile jaunt provided a good workout, a jungle atmosphere, and some picturesque vantage points of the volcano. There are several places to exit the trail early if you’re not feeling up for finishing it in its entirety.

Plus, you get to walk through a creepy sugar cane field at the end.

The main trail at the Arenal Volcano National Park (yes, this is a different place down the road) was similar in length but much flatter, with less interesting scenery, and the primary viewing point of the volcano was at a lower elevation. Both areas give you the opportunity to walk on some lava fields, which is kind of neat. Entrance to each park/trail costs $15 per person to enter, if you’re not a native Costa Rican. We had half a mind to try out the La Peninsula trail that headed down to Lake Arenal, but ran into a rain storm, and also had some doubts about making it to the trailhead without a 4×4 vehicle as we encountered some rockier terrain and hills.

While it may seem that this map would be all that we would need to find the trails we were after, in our general experience in Costa Rica, whether driving to a trail or trying to find your way around one, signage is typically okay, but not as smack-you-in-the-face obvious as we’re used to in much of the US. There will probably be times where you’ll come across a trail sign that contradicts an earlier sign, or there will be no signs and you’ll have to make assumptions on which way to go. Hay no problema (there is no problem) if you retrace your steps, and ask a friendly local for help if in need.

Unfortunately in our stay we did not get to stop by the beautiful La Fortuna waterfall, but we resolved to save that for another visit.

Other than running into some rough terrain while seeing out additional hiking trails, our initial driving experience in Costa Rica was more positive than anticipated.

For those that aren’t aware, there are numerous stereotypes about driving in Latin America compared to the United States.

In our experience, these were all true. But, by practicing a bit more caution and patience, everything worked out alright. We feel comfortable should the need arise to drive elsewhere in the country, except of course for the capital city of San Jose. Even the locals hate driving there, so I’m not sure we’ll be so interested in that experiment.

Early on a muggy Monday morning, we drove through the town one final time in this leg of our journey to return our rental car. As we again passed parents dropping off their little ones at las escuelas (the schools), saw bakeries and shops opening up for the day, we reflected on our experience in a “true” Tico town, one not so filled with beach-goers, tourists, and expats.

Next stop via the shuttle: back to Manuel Antonio, to the expat, tourist beach party. Vamos!